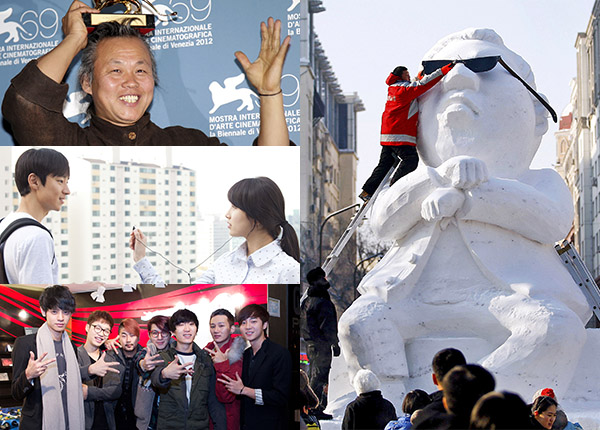 Clockwise from top left: Kim Ki-duk with his Golden Lion Prize for “Pieta” at the Venice Film Festival; a Psy snowman in Harbin, China; top contestants of Mnet’s “Superstar K” ; a clip from “Architecture 101,” a film that triggered 1990s fever [Reuters/AP/CJ Entertainment/JoongAng Ilbo]


The year 2012 will go down as one of the most significant periods in the history of Korean culture - and that’s saying a lot for a society that dates back millennia. Psy galloped to international stardom in an instant, breaking numerous world records and adding fuel to the already booming K-pop scene.

Korean film and television also had a year to remember, with Kim Ki-duk’s “Pieta” winning the Golden Lion Prize at the Venice Film Festival. Actors and directors continued their surge throughout Asia, with K-drama success spanning from Japan to China and Myanmar.

While Psy and “Pieta” stole the headlines, there was a dark side to the year in the entertainment industry. Sexual assault cases involving young women hoping to become celebrities and stars accused of using Propofol are a few of the year’s low points.

The following is a list of the top five entertainment stories of 2012.

Psy has so many achievements in 2012 that it has become seemingly impossible to list them all. The Korean rapper’s hit song “Gangnam Style” topped numerous charts, from being the most-searched keyword on Google to becoming the first-ever video on YouTube to reach one billion views.

He received numerous awards from both in and out of the country including Best Video at the 2012 MTV Europe Music Awards in Germany; the New Media Award at the American Music Awards; and the Okgwan Order of Cultural Merit, one of Korea’s highest cultural honors given by the Ministry of Culture, Sports and Tourism.

He is said to have become friends with numerous world stars, going to clubs with Usher and hanging out with Justin Bieber, Conan O’Brien, Hugh Jackman, Kanye West and many more. He appeared on famous talk shows in the United States, horse trotted with Madonna in Madison Square Garden and even danced in front of U.S. President Barack Obama.

This year has been a big one for the Korean film industry. It closed in on the annual box office record of 100 million, according to the Korea Film Council, thanks to big hits ranging from “The Thieves” and “Gwanghae: The Man Who Became King” to “A Wearwolf Boy” and “Architecture 101.”

“Gwanghae” and “The Thieves” generated ticket sales of more than 10 million each. So far this year, a total of nine films have exceeded the four-million mark. The local market share for Korean films also rose, reaching 59 percent to date, which is about 7.1 percent more than last year.

During an event to commemorate the Korean films exceeding 100 million viewers early this month, the minister of culture, sports and tourism, Choi Gwang-sik, said that this year’s success of domestic movies can be attributed to “the passion and ongoing persistence of the filmmakers.”

Kim Ki-duk’s “Pieta” triumphed both at home and abroad by securing the Golden Lion Prize at the Venice Film Festival. It was deemed Film of the Year at this year’s Blue Dragon Awards at home. More recently, the gory thriller was also named best foreign film at the Satellite Awards in Los Angeles on Dec. 18.

Cases of sexual assault involving young women hoping to become celebrities has been a recurring problem in the entertainment industry, but this year several high-profile cases surfaced with the CEO of Open World Entertainment, a 51-year-old man surnamed Jang, arrested in April on charges of repeated sexually harassment, assault and rape since 2008.

Ko Young-wook, 37, a former member of the 1990s pop band Roora, was also investigated by the police for allegedly raping three aspiring singers in their teens in March. An arrest warrant was rejected two months later.

Such cases led the government to initiate a comprehensive inspection of the talent agencies. The Ministry of Culture, Sports and Tourism said there are about 1,000 talent agencies in the country, while only half are registered. The ministry said it will push for new regulations concerning the creation of such agencies including minimum requirements for assets, office space and employees.

This year kicked it back to the 1990s. With members of Gen X - people born from the late 1960s through the early 1980s - today’s biggest consumers and at the center of content creation, the culture of the 1990s dominated the industry in 2012.

Culture critics point to the release of a Korean film, “Architecture 101,” as the contributor to this nostalgic boom. The film tells the story of a 35-year-old man’s first love, flashing back to the early ’90s when they met for the first time. The flick has reignited throwback fever among Koreans and has made the fashion, music and celebrities of the period cool once again.

This year was a relatively tough one for large idol groups. The spotlight in 2012 was on the so-called “real talents” who appear on singing-survival shows including SBS’s “K-pop Star,” MBC’s “The Greatest Birth” and Mnet’s “Superstar K.”

Lee Hi, the runner-up of “K-pop Star” who signed a contract with YG Entertainment, instantly became No. 1 on numerous music charts with her debut song “1,2,3,4,” while “Superstar K” runner-up band Busker Busker also dominated the charts during the first half of this year.

More recently, Roy Kim, Jung Joon-young and the DickPunks from the fourth season of “Superstar K” made headlines, beating out idol groups.

In light of the success of these vocalists who triumphed over pretty faces and glitz, Yang Hyun-suk of YG Entertainment agreed that idol groups were in for a rough time ahead.