Park is Entertainer of the Year

Park is Entertainer of the Year 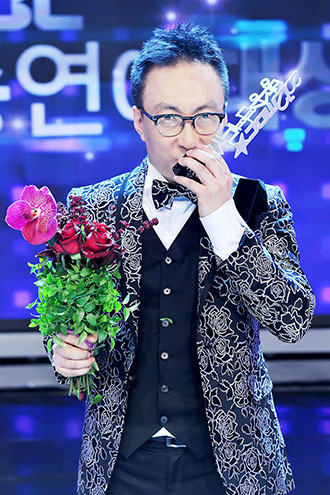 Comedian Park Myung-soo called it a dream come true when he received the top entertainer award of the year from MBC over rival Yoo Jae-seok.

Park, 42, won the grand prize during the 2012 MBC Entertainment Award Ceremony on Saturday, the first top award that he received from the country’s major television networks since his debut two decades ago.

“I am so happy,” Park said during his acceptance speech with his trademark nonchalant expression. “I am holding back tears, but I am crying inside.”

Entertainer Yoo, 40, known for his witty hosting of various programs, was considered the favorite to win the MBC grand prize, which would have been his fifth, but Park surpassed him by appearing on a number of programs this year, giving him the nickname of an “MBC employee.”

The programs he hosted included “Infinite Challenge,” “I Am a Singer 2,” “Ultimate Quiz Show Q” and “Fall in Comedy.”