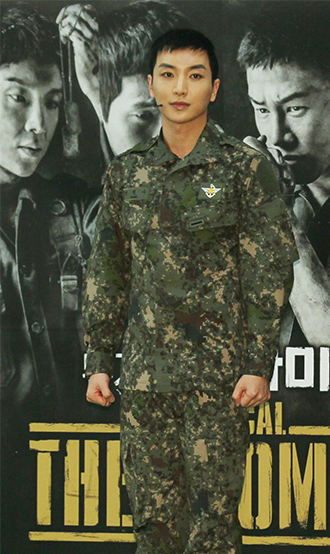 Although he’s currently serving in the Army, the military made a special exemption for Super Junior’s Leeteuk to attend the SBS Entertainment Awards to claim his prize in person.

The boy band member made a surprise appearance at the show, which took place on Dec. 30 at SBS Prism Hall in Sangam-dong, western Seoul.

Leeteuk made his way to the stage to take home the “Best Entertainer” prize for his efforts in hosting “Mighty Heart.”

Dressed in combat gear, the leader of the boy group barked out, “Sgt. Park Jung-soo reporting for duty!” to a crowded house.

He also thanked his superiors and the Army headquarters for allowing him a day’s leave to collect the award.

“I would also like to thank all military personnel who are freezing their behinds off today serving the country,” said Leeteuk, who enlisted on Oct. 30.

While on stage, the singer also thanked his band members for their support.