Psy starts off the new year in style

Psy starts off the new year in style 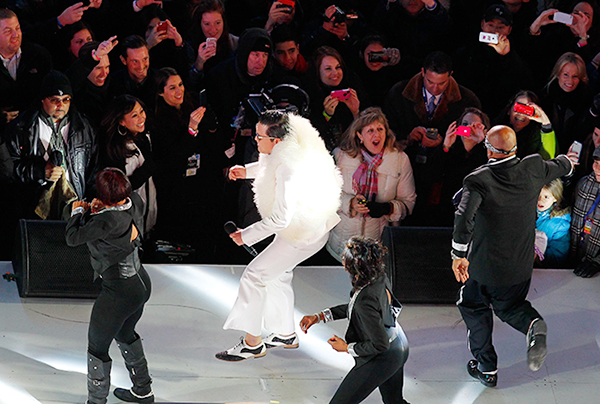 To say farewell to what has been a great year, Psy took part in ABC’s “Dick Clark’s New Year’s Rockin’ Eve” at Times Square in New York.

The turnout was massive for the live showcase that crosses between the east coast and the west where Psy performed his trademark horse moves one last time for 2012.

For that perfect rendition of “Gangnam Style,” Psy recruited the help of some good friends from back home as well as one very distinguished guest: MC Hammer whom he already performed with at the American Music Awards in November.

As they did so at the AMAs, the two danced to a mash-up of “Gangnam Style” while the crowd went wild and danced along both in New York and Hollywood.

Other guests to accompany Psy on stage were his Korean friends and fellow entertainers Yoo Jae-seok, No Hong-chul and singer Haha.

No and Yoo in particular dressed exactly as they did in the hit video that launched Psy’s career last year.