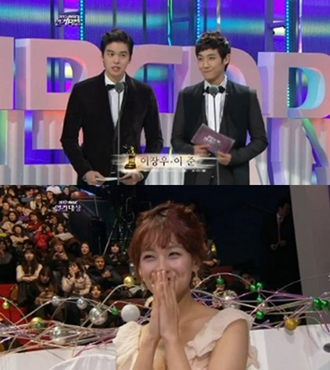 Just three days into the new year we have another Hallyu couple on the scene.
Following in the stead of the Rain and Kim Tae-hee, pictures of actors Oh Yeon-seo and Lee Jang-woo on a date were leaked.

Sports Seoul posted the pictures on its Web site on Jan. 3 and said that the two have been dating for a month.
In the pictures, the two can be seen dressed incognito in caps and scarves covering most of their features, as celebrity couples often do.

In addition there are pictures of them embracing and looking very lovey-dovey.
Apparently the two fell for one another while playing on-screen lovers in the daily drama “Oh Ja-ryong Is Coming” which began airing in November.
Since December, according to the internet news specialist, the two indulged in dates as often as they could.

Most recently, the two were spotted having dinner together with a friend on Dec. 26. A week before, the news media spotted Lee driving Oh home and the actress blowing him kisses as she walked away.

Funnily enough, when Oh was asked by her fake spouse Lee Joon from the show “We Got Married,” as to which of her co-stars she preferred at the MBC Acting Awards on Dec. 31, Oh chose Lee.