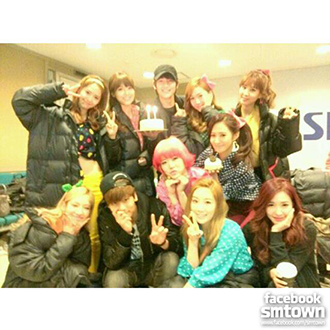 They are all family at SM Entertainment. On its official Facebook page, the K-pop agency posted a picture where SHINee’s Jonghyun and Minho can be seen backstage with Girls’ Generation just before the girls took to the stage to debut their new song “I Got a Boy.”

In the picture taken before the girl band’s performance at SBS’ “Popular Songs,” the two boys can be seen with a good luck cake and fans were quick to praise the two groups on their amicable relationship.

A day earlier on Jan. 5, the nine-member force of K-pop took to the stage in Gangnam through a hologram concert near Gangnam Subway Station.
During the “Virtual Concert,” 3-D holograms of the singers were shown on a makeshift stage as the group sang “I Got a Boy” and “Dancing Queen.”