Dad who adopted recruits others

Dad who adopted recruits others 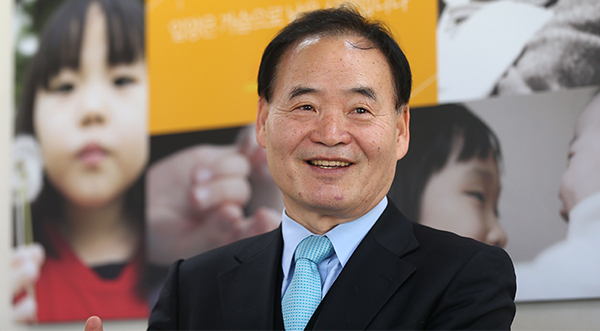 Shin Eun-hang, who heads Korea Adoption Services, an organization affiliated with the Ministry of Health and Welfare, is the father of an adopted son. He says he will draw upon his personal experiences to promote adoption and assist adult adoptees in finding their birth parents. By Oh Jong-taek


Shin Eun-hang, the new head of Korea Adoption Services, isn’t just taking on a job; he’s continuing a personal journey. As the father of an adopted child, he knows first hand the difficulties faced by children who grow up apart from their birth parents.

“One day some years ago, my son decided to leave the house and stood at the door, apparently not knowing where to go while holding a tiny plastic bag in which he put his socks and underwear after I scolded for some misbehavior. He was 5 years old,” Shin said. “To him, that little scolding was more than that. Dong-young was already hurt inside when he first came home.”

Now, as head of the new government organization launched last August, he will work to place orphans in homes like his own, where they can work to overcome emotional drama and grow into healthy adults.

“That experience made me realize no matter how nicely children are treated in orphanages, they need to be raised at home by parents, not in a room crowded with a dozen other kids all yearning for care and attention,” he explained.

Though he worked at the Ministry of Health and Welfare for 30 years, Shin said that he was not involved with adoption issues until 2002, when he agreed to adopt a 3-month-old boy after encouragement from his wife, Kim Myung-hee.

Kim, 63, began to work as a volunteer at an orphanage in Seoul each week in 2002 and met Dong-young while volunteering there.

Shin, who is 67, said his wife asked him to help with the volunteer work as well and to meet Dong-young.

“The very first words Dong-young spoke to us were ‘mom’ and ‘dad,’?” Shin recalled. “My wife and I took Dong-young to a gathering of friends before we formally adopted him. At the meeting, my wife abruptly introduced Dong-young as our son, which surprised me and indicated that she was ready to have him as part of the family.”

Shin also said he feels empathy for adoptees because of his personal history. “I was born and grew up in Hwanghae Province, North Korea. To this day, I greatly miss my hometown and, in the same way, can only imagine how much adult adoptees hope to find their parents,” he said.

As head of Korea Adoption Services, one of his tasks is helping adoptees find their birth parents. The agency is affiliated with the Welfare Ministry and collects information from private adoption agencies such as Holt Children’s Services to make it easier for adoptees to discover their family roots once they grow up.

“As a parent of an adopted child, I also wish to find my son’s birth parents if it’s possible in the future,” Shin explained. “And as head of Korea Adoption Services, I will do my best to help adult adoptees realize their long-held wish of discovering their family roots.”