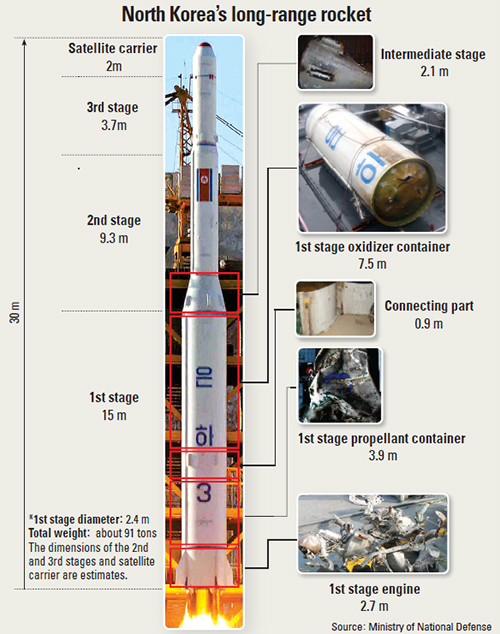 North Korea is presumed to have independently built key parts of the long-range rocket it launched last month, with the exception of some commercially available materials imported from overseas, experts in Seoul said yesterday.

After analyzing the debris from the rocket’s first stage retrieved from waters off the western coast of the Korean Peninsula after the Dec. 12 launch, South Korean experts concluded that Pyongyang in fact tested its inter-continental ballistic missile capable of flying as far as 10,000 kilometers, further enhancing its missile capacity.

“Although North Korea was restricted from securing advanced technologies and materials due to international sanctions, it has honed its long-range ballistic missile technology through several tests,” an intelligence official at Seoul’s defense ministry said, asking for anonymity.

About 10 components, including wires, an electric sensor and a power voltage converter were found to have been imported from five countries, including China and European nations, the report said, without disclosing all of their names, citing diplomatic issues.

But there were no foreign materials that violated the Missile Technology Control Regime (MTCR), a voluntary guideline shared by 34 countries aimed at limiting exports of delivery systems and related technology for ballistic missiles, it said.

“Although there were no imported goods that violate the MTCR, the international community will have discussions about whether to add the imported materials to the list of controlled items,” the official said.

The analysis comes as the international community is moving toward tightening sanctions against the North for the December rocket launch, which is seen as a disguised test for a ballistic missile that can strike as far as the western U.S. Pyongyang claims the December launch was aimed at placing an earth observation satellite in space.

Seoul officials said there will be further investigations to figure out whether North Korea violated the United Nations Security Council Resolution 1874, a sanction imposed on the North after its second nuclear test in 2009. The resolution bans weapons exports and financial transactions between U.N. members and North Korea.

The South Korean government plans to submit the report to the U.N. and MTCR members through diplomatic channels, according to officials.

The Unha-3 rocket is 30 meters long, including a 15-meter first stage, a 9.3-meter second stage, a 3.7-meter third stage, and a 2-meter satellite carrier on the top. Together with a 48-ton oxidizer container, the rocket is estimated to weigh 91 tons, the report noted.

The rocket itself was made of a mixture of aluminum and magnesium, AIMg6, and used kerosene, a combustible hydrocarbon liquid, as fuel, according to the report.

The oxidizer container was made of several patch panels, which showed poor welding and uneven surfaces, an indication that North Korea seems to have no advanced technology in that area, the report said. Yonhap