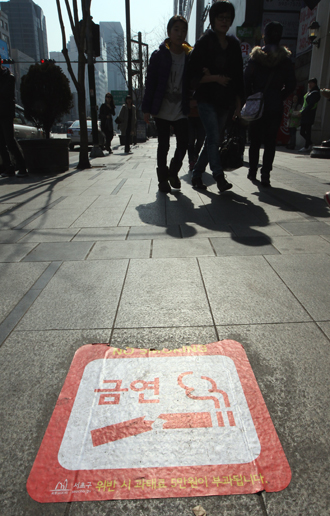 A “No Smoking” sign warns of a 50,000 won (47dollars) fine on a pedestrian walkway in Gangnam, southern Seoul. By Byun Sun-goo

Cigarette sales were hit by a double whammy last year as economic growth shrank and the government stepped up its antismoking movement, forcing some brands to lower their retail prices.

Ministop Korea, the local operator of the Japanese convenience store chain, said it saw its cigarette sales fall 7.6 percent in 2012.

Nearly half of all cigarettes in Korea are sold through convenience stores.

Foreign brands are not the only ones hurting, however, as Korea’s largest tobacco manufacturer and distributor KT&G also posted disappointing fourth-quarter results.

Although its sales were on par with the same quarter one year earlier at 954 billion won ($897.7 million), operating profit was down 15 percent to 181 billion won, falling short of industry expectations. Its operating profit plummeted 42 percent in the previous quarter in on-year terms, while sales slipped 10 percent.

Most brokerages blamed the company’s poor performance on weaker sales of both red ginseng and tobacco products. The value of KT&G’s domestic tobacco sales edged down 0.5 percent to 445 billion won in the third quarter of last year from 2010, but by volume they dropped by a larger 4.6 percent.

The trend is expected to continue due to a strict smoking ban in public areas and anti-smoking movements at workplaces.

“A growing number of consumers tend to quit smoking or buy cheaper cigarettes due to the economic slump and the so-called well-being trend,” said an industry official. “The tendency will likely continue this year.”

To combat flagging sales, BAT Korea is lowering some of its prices. Last week it lowered the price of its Dunhill slim cigarettes from 2,700 won to 2,500 won. In Korea, slim cigarettes make up about 30 percent of all cigarette sales. PM Korea made the first move by slashing 400 won off its Virginia Super Slim brand to leave the price at 2,500 won a pack last April.

The moves represent a turnaround after foreign brands have been raising their prices over the last two years, despite efforts by the by government to keep a lid on inflation. The foreign tobacco vendors claimed their hands were being forced by rising commodity prices.

BAT Korea, which has the largest share among foreign brands here, and the second-largest market share after KT&G, was the first to make its products more expensive.

JTI Korea, the local distributor of the popular Japanese brand, soon followed suit and PM Korea raised the price of its hit product Marlboro early last year. KT&G was the only company that kept its price at 2,500 won a pack.

Reviews about the future fortunes of the domestic industry are now mixed. Some analysts believe KT&G’s performance will improve with the incoming government as it may raise the tobacco tax, which could bump up prices by as much as 10 percent.

Others like Woo Won-sung, an analyst at Kiwoom Securities, are less optimistic.

“The tobacco industry faces the likelihood of worsening sales as stricter rules on indoor smoking are enforced,” Woo said. “Although prices may go up if higher taxes are applied, [the industry may still suffer as] sales will inevitably fall.”