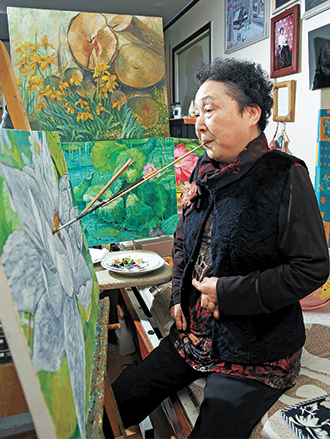 Kim Song-ae has managed to continue to create art and help others. She was diagnosed with rheumatoid arthritis when she was 27. [JoongAng Ilbo]

GWANGJU - To 66-year-old Kim Seong-ae, painting is something she does with her mouth, not her hands.

Before she stumbled onto her passion to live every day through painting, she had difficult life. Diagnosed with rheumatoid arthritis when she was 27, she was unable to work or raise herself up by the time she was 30.

Several times, Kim thought about ending her life. “When my mother died, I was only thinking one thing: suicide,” she says.

However, a visit to her sister’s house changed her life. Kim, who didn’t want to show tears in front of her nieces and nephews, had her head lowered copying a portrait of Jesus on the wall.

What she didn’t expect were the compliments from the young people on her painting.

“At that moment, I realized there was something I could do,” she recalls.

When she first found her talent for art, she was still able to move around brushes with her hands. However, her condition worsened and by 1992 she was no longer able to hold a brush with her hand.

“I fell into another period of frustration, because painting had been the only thing I could do,” she says.

After struggling for two years, she saw an artist painting with a brush held in his mouth on television.

“I didn’t realize until then that I could paint using my mouth,” she says.

“Then it just hit me that I could not waste any more time just because I was unable to use my hands to paint.”

Before the TV program ended, she called a volunteer who had been helping her and asked her to bring her painting equipment.

Since then, she has not stopped doing what she loves. Even though her arthritis continued to reduce her mobility to the point where she wasn’t able to turn her head, she has painted at least two hours every day.

After she won a prize at a local painting competition for the disabled in 1996, she signed up to be a member of the Association of Mouth and Foot Painting Artists, a global organization. Her passion for painting also led her to meet her husband when an acquaintance introduced them eight years ago.

“My husband even sharpens bamboo to make me brushes I can hold with my mouth,” says Kim. He ties a painting brush to a long bamboo stick to make it easier for her to paint on paper from a distance.

“I’m thankful for him staying by my side,” she says.

Kim now turns her attention to helping neighbors in need. Last year, she donated her paintings to We Start, an organization that helps children from low-income families.

We Start compiled Kim’s paintings for its calendar this year along with the stories of 12 children who stay positive despite the difficulties of their lives.

In an attempt to reach out to children overseas, she plans to hold an art exhibition to raise funds.

“Although my painting began as a way to hide my tears, now I hope my paintings can be used to wipe away the tears of others.”