Accordingly, the city’s gray backdrop and its history of division helped get his creative juices flowing for “The Berlin File,” his upcoming espionage action thriller set in the German capital following North and South Korean secret agents.

“I visited Berlin to attend the Berlin International Film Festival in 2011 for my previous work, ‘The Unjust.’ The city still seemed to be full of that cold war atmosphere,” said the director during a press event earlier this month ahead of the movie’s release Wednesday.

“I really liked reading espionage novels as a boy and I remember a line that said six out of 10 people living in Berlin were spies. The city seems to be shrouded in mystery and filled with conspiracies,” said the 40-year-old filmmaker. 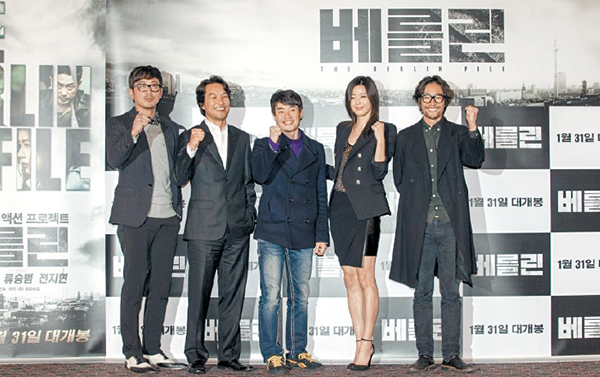 The thriller revolves around secret agent and weapons trader Pyo Jong-seong (Ha Jung-woo). When an arms deal with an Arab group goes bad, Pyo and his wife, Ryon Jung-hee (Jun Ji-hyun), become the targets of veteran South Korean intelligence chief Jeong Jin-su (Han Suk-kyu), who has tracked down bank records of the deal.

Also chasing Pyo is Ko Myung-soo (Ryu Seung-beom), a North Korean official whose power and influence has increased because of a leadership transition.

The notorious North Korean agent is determined to test loyalties of all involved and begins to implicate Ryon, a translator at the North Korean Embassy in the German capital who is suspected of acting as a double agent.

The 10 billion won budget ($9.35 million) film has an all-star cast and represents an ambitious project for the action auteur, whose previous productions include “The City of Violence” (2006) and “Crying Fist” (2005).

“This movie is like a turning point for me. I’ve never directed a movie of this scale, and it is also the first time for me to shoot scenes overseas, working with foreign staff, ” said Ryu.

The gathering of four sought-after Korean stars is sure to appeal to local moviegoers, but Ryu said the stellar cast placed a huge pressure on him.

“People’s expectations will be very high, thanks to the four big-name stars. So if the movie is poorly made, people will come out and blame me,” he said.

Jung Doo-hong, one of Korea’s most highly recognized action directors who worked on “The City of Violence,” has teamed up with Ryu again to incoach the actors in martial arts. He also established Seoul Action School in Seoul.

“I started from scratch at the action school,” said Ha Jung-woo. “I was really worried about action performances, but action director Jung helped me a lot both physically and mentally.

“Despite many people who encouraged me, the scenes with wire action were the most challenging. I had to throw myself into shattered glasses. I once fell from a wire. I can’t even ride the pirate ship at an amusement park, so on the day of the wire action shooting, I felt as if I was being dragged into a slaughterhouse.”

His co-star, Jun Ji-hyun, was in the same boat.

She is reported to have been suffered facial injuries when hit by an empty cartridge and shards. Having played a restrained, secretive North Korean woman, she needed to contend with an additional hardship: loneliness.

“Jung-hee is gloomy and mysterious. So I assigned a secret mission to the staff, which was to make the actress feel lonely,” said Ryu. “I know it was very mean, and this is the first time I have told anyone.”

But the director’s technique worked, and the 31-year-old felt the solitude throughout shooting.

“To be honest, I couldn’t become close to staff and felt very lonely in Berlin,” said Jun. “But there was a lot of down time for me compared to male actors, because my scenes usually don’t require heavy action performances. ”

Unlike Jun and Ha, actor Ryu Seung-bum, the brother of the director, totally enjoyed the shooting and car chases.

“It was really funny. I was so excited that I volunteered to fire the gun. There was a staff assistant who instructed us in how to use the guns,” said the 32-year-old.

He also emphasized that he doesn’t get complacent due to his brotherly bond with the director. “The Berlin File” marks the fifth film in which the Ryu brothers have worked together.

“Some people get us wrong. But I am just doing my best when working with my brother,” he said. “Because I’ve long worked with him for so long, I can now capture exactly what he wants.”