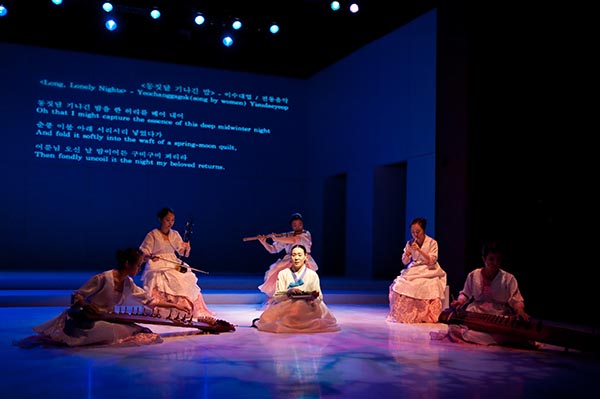 Jeong Ga Ak Hoe will perform during a two-day documentary concert titled “Arirang, the Song of Life.” Provided by the organizer

Ever since arirang was added to Unesco’s Intangible Cultural Heritage List last month, Koreans have rolled up their sleeves to promote Korea’s traditional folk song, which is considered country’s “second national anthem.”

While local governments stage celebratory performances and research groups continue to study the meaning of the word arirang, Seoul Namsan Traditional Theater has organized a documentary concert titled “Arirang, the Song of Life.”

According to the theater, a documentary concert combines performance and film. Therefore, “Arirang, the Song of Life” will feature a video that took four months to film in Pyeongchang, Gangwon, as well as a gugak concert by a traditional music ensemble, Jeong Ga Ak Hoe.

Among numerous versions of arirang across the Korean Peninsula, the theater chose “Pyeongchang Arari.”

“Pyeongchang Arari” is sori, or narrative singing, by residents of a small town called Hoedong-ri in Pyeongchang while picking wild greens for a living to forget about their exhausting lives.

“The lyrics include the deep fragrance of these people’s lives, something to take note of while listening to the Pyeongchang Arari,” said an official from the theater.

The documentary features these townspeople, who are also sori singers as well as the members of the Pyeongchang Arari Preservation Society.

The songs in the film as well as performance by the gugak ensemble will allow the audience to share the human emotions of joy, anger, sorrow and pleasure in the tune and the lyrics, explained the theater.

“We chose Pyeongchang Arari for the concert although it is less known even by Koreans compared to the famous tune of arirang. It has its own charm of genuineness but roughness,” said the theater official. “It will be a great opportunity for both Koreans and foreigners to listen and witness another side of arirang.”

Arirang was placed on the Intangible Cultural Heritage List list in December. According to the Unesco, arirang’s great virtue “is its respect for human creativity, freedom of expression and empathy.”

“Everyone can create new lyrics, adding to the song’s regional, historical and genre variations, and cultural diversity.”

The concert will be held at Seoul Namsan Traditional Theater on Thursday and Friday at 8 p.m. Tickets cost 10,000 won. To get there by subway, get off at Chungmuro Station on lines No. 3 and 4 and use exit No. 3 or 4. For more information, call (02) 2261-0512 or visit sngad.sejongpac.or.kr