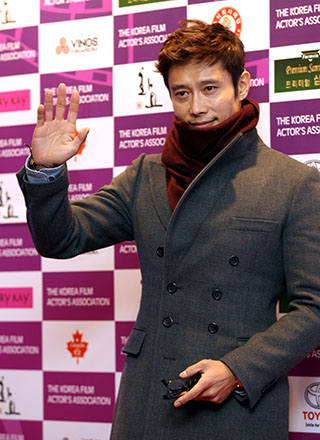 Despite it being over a year since his last visit to Japan, demand for Lee Byung-hun, or Byunsama (“sama” is an honorific title in Japanese) as he is affectionately called there, has not subsided.

When Lee landed at Haneda Airport in Tokyo for movie promotions on Monday, he was greeted by about 350 fans.

Lee who was in Tokyo to promote his movie “Gwanghae” (“Masquerade”) which will open there next month, thanked and shook hands with fans.

“It’s so nice to come back after such a long time,” he said. “Thanks for supporting me despite the years.” The Hallyu star was last in Japan in December 2011.

After the official media event, Lee took part in promotions in Shinjuku, Roppongi and Marunouchi, meeting with a total of about 1,500 fans.

The film starring Lee opened in Korea in September and has drawn more than 12.3 million viewers, becoming the third most-watched Korean flick.