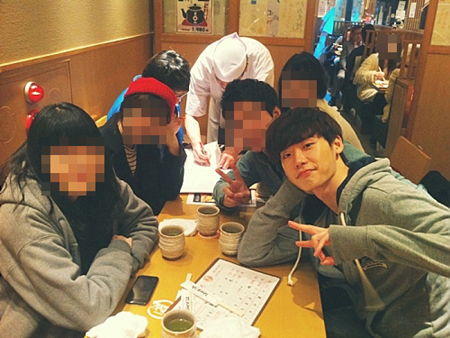 The star of the hit drama “School,” Lee Jong-suk, has denied a romance with actress Jung So-min after the two were spotted leaving on the same plane.

The two entertainers were headed to Japan together, but Lee’s agency insisted it was a coincidence.

“They don’t even know each other,” a spokesperson said.

As if the short explanation didn’t do him justice, Lee updated his fans on the issue using Me2Day on Monday night. The 23-year-old uploaded a picture of himself and friends with the caption, “Holy smokes! I came to visit my sibling.”

“So I must be kind of a big deal now. But why isn’t anyone asking me to be a ramen model?” he added.

Lee is a model-turned-actor who made it into the big league through the drama “Secret Garden” in which he played a gifted gay musician.

In 2011, he also starred in the MBC sitcom “High-Kick: Attack of the Short-Legged.”

He also made an appearance in Rain’s movie “R2B: Return to Base.”