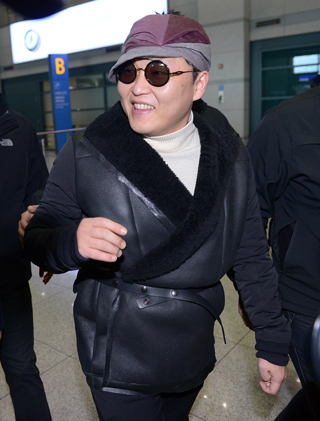 Psy made an impromptu statement about his new album on Monday while stranded at Incheon International Airport due to a snow delay.

When he was greeted by a throng of journalists, the 35-year-old rapper announced that the release date would probably be in April.

“The song is done, but it’s hell working on the music video,” said the star of “Gangnam Style.”

When asked how he felt about the airing of his first U.S. commercial for Wonderful Pistachio during the Super Bowl, Psy said he was “proud.”

The comical singer rocked America with the new ad in which he appeared in a neon green suit and urged viewers to “crackin’ Gangnam Style.”

He also discussed his scheduled performance at the Feb. 25 inauguration for President-elect Park Geun-hye.

The Hallyu star said simply that it was “an honor.”

The singer then made his way home to spend the day with his family before returning to the airport for a flight to the United States yesterday.