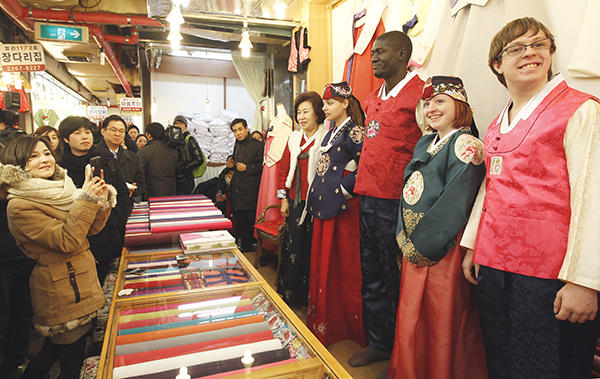 
The Seoul Metropolitan Government said yesterday they have launched a new city bus tour that will introduce the Seoul’s traditional markets to domestic and international travelers.

The buses will run every 35 minutes and make 15 stops, including at: Doosan Tower in Dongdaemun, central Seoul, which is the start and end of the tour; Namdaemun; Myeong-dong; Insa-dong; Gwangjang Market, a popular area for hanbok (Korean traditional costume) sales; as well as Yangnyeongsi Oriental Medicine Market, over the course of 105 minutes.

The Seoul government said a ticket will allow tourists to get on and off the bus. A ticket for adults is 12,000 won ($11) and 8,000 won for children aged 6-19. The tour provides five language translation services - Korean, English, Japanese, Chinese and French.

“Tourists can listen to the translation via headphones provided inside the buses after they select a language,” Lim Jin-young, official from the Tour Business Division from the city government, told the Korea JoongAng Daily.

“And we will distribute guidebooks for the tour at the Seoul Tourist Information Centers at well-known locations, including Gwanghwamun and Seoul Station.”

“We hope we can boost the economy in Seoul’s traditional market areas through this new city bus tour program,” said Park Jin-young, director of the city government’s Tour Business Division.

“We guarantee that those foreign travelers can experience Seoul’s excellent traditional culture including food and fashion from the program. They can taste bindaetteok, Korean-style pancakes, and also shop for hanbok, Korean traditional attire, at these markets.”

He added that the ticket price for the city bus tour is lower than other city tour programs. It costs about 65,499 won for the Tokyo City Bus Tour and the price for New York City Bus Tour is about 50,050 won.

There are currently four city tour bus programs being operated by the city government - City Circle Course, which circles Seoul’s famous tourists attractions, including Gwanghwamun and Itaewon, the Cheonggye Stream and the Palace Course, which includes Gyeongbok and Deoksu palaces, and two Night Courses, where people can enjoy the city at night, including by the Han River.