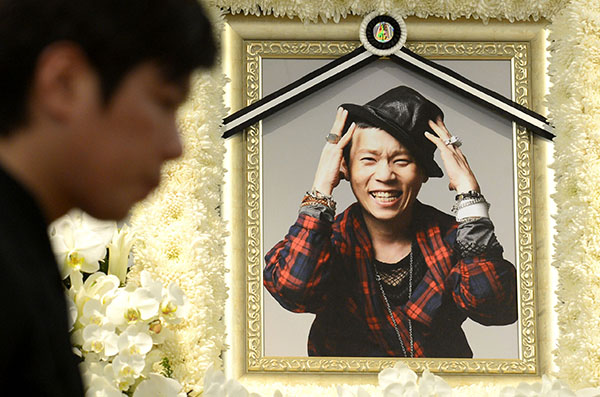 A photo of singer Lim Yoon-taek, who died of cancer at the age of 32 on Monday night, at his funeral altar in Severance Hospital yesterday. [NEWSIS]

The 32-year-old was at Severance Hospital in western Seoul with friends and family on the Lunar New Year holiday when he breathed his last.

A funeral altar was set up at the Sinchon hospital for the deceased vocalist, whose group rose to fame after winning the third season of the TV audition show “Super Star K” while he battled stage four cancer.

Upon news of his death, entertainers from Tiger JK to Simon D were quick to pay their respects and profess their love for the late singer online. Psy is also set to make a visit to Lim’s memorial. 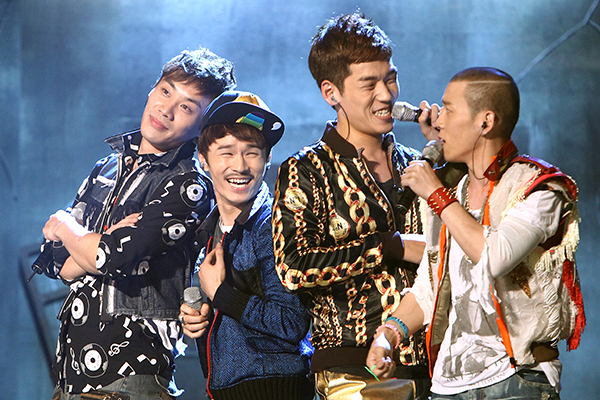 Ulala Session in a 2011 performance with Lim Yoon-taek on the far right. [JoongAng Ilbo]

The picture of Lim on display at the hospital memorial showed him in his usual cheerful demeanor, but this failed to console friends and family who wept at the loss of the new father and husband who had battled the life-threatening illness with a smile.

Despite his open approach to the state of his health and his shrinking frame, there were many who doubted Lim’s illness.

Especially online, some netizens had accused Lim of faking being sick for publicity.

The fact that he married his girlfriend last August and then became a father was counted as evidence that he indeed wasn’t ill.

Many posited that men undergoing chemotherapy are unable to father children.

After winning the audition program in 2011, Ulala Session released an album and continued performing.

In addition, Lim had appeared on TV time and time again to defend himself against people who claimed he was faking.

In October, when Lim became a father for the first time, he called the experience “a miracle.”

Despite a backlash from some who believed it was wrong to father a child with death so near, Lim said that having a daughter was like “a sign that I once lived.”

As recently as last month Lim was busy being an active father and musician.

He made an appearance and performed at 2013 Asia Model Awards on Jan. 17.

He also tweeted about celebrating his daughter’s 100th day with friends and family earlier in the month.