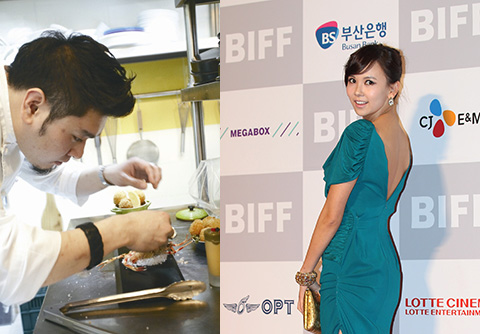 On Air Entertainment announced yesterday that Kim will tie the knot with celebrity chef Raymon Kim on May 13 at a wedding center in Yeoksam-dong, southern Seoul.

The agency spokesperson told Yonhap News Agency that the two met on the cable show “Kitchen Fighter,” where Kim Ji-woo was a contestant, battling out against other entertainers while Raymon Kim was a judge.

At one point the 37-year-old chef had reduced the 29-year-old to tears with his harsh commentary.

Despite the on-screen discord, the two apparently had a connection and began dating in late August.

In regard to suspicions from netizens, Kim’s agency said that the actress was not pregnant.

If there was a reason for the speedy nuptial, the agency said that it was partly due to the groom’s age.

“The parents sat down towards end of the year and because Raymon is old they were of the opinion that the sooner the better,” said a spokesperson for Kim Ji-woo.