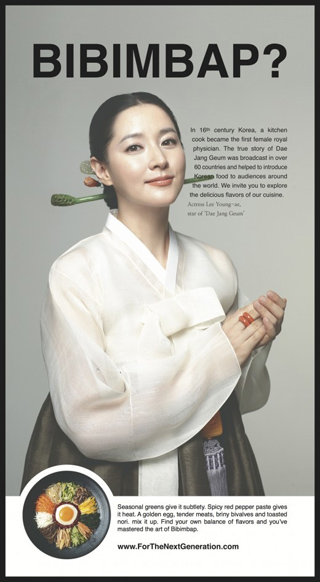 Hallyu actress Lee Young-ae graced the pages of The New York Times a couple of days ago, promoting a rice dish with mixed veggies. The star of the hit drama “Dae Jang Geum” was the model chosen for a bibimbap ad by visiting scholar Seo Kyung-duk of Sungshin Women’s University. The ad on Page 15 of the paper distributed Wednesday introduced the popular Korean dish and the story of Dae Jang Geum through a statement made by Lee, who is wearing hanbok, the traditional attire. Seo, who has worked with celebrities Kim Jang-hoon and Song Hye-gyo in the past to promote Korean culture, history and heritage abroad, said Lee was picked for her role in the famed drama of 2003.

“As she was the star of a drama watched by three billion people in more than 90 countries, we thought she’d be the best person to introduce bibimbap,” said Seo.

Meanwhile, Lee said she was also stoked to be a part of the movement to spread Hallyu far and wide. “As the drama ‘Dae Jang Geum’ is still airing around the world, Lee is passionate about getting involved in increasing awareness for Korean cuisine,” said Lee’s spokesperson.