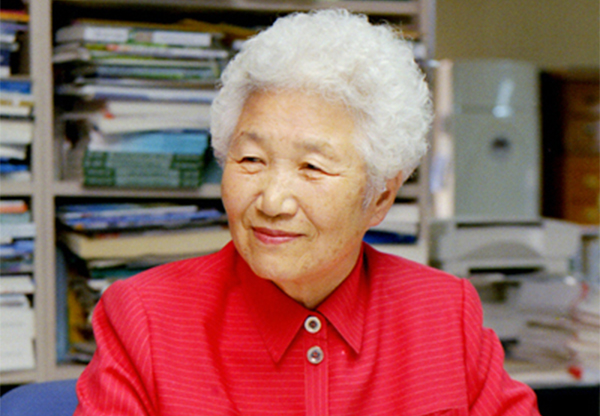 A red shirt and gray hair were the trademarks of Chung Kwang-mo, founder and honorary chairwoman of the Consumers Union of Korea. [JoongAng Ilbo]

Industry insiders remember Chung’s gray hair and her trademark red shirt. They credited her not only with helping to improve consumer rights, but enhancing corporate competitiveness.

Born in 1929 in Suwon, Gyeonggi, Chung was a reporter who covered social news at the Pyeonghwa newspaper before moving to the Hankook Ilbo in 1962, and was the first woman to cover the Blue House. She was chairman of the Korea Women Journalists Association in 1968.

Chung’s determination to set up a consumer rights group dates to 1968, when she traveled to Japan to meet with women journalists.

“During the meeting, Japanese women journalists were covering a story on mouse droppings discovered in a snack box by a consumer rights group,” Chung said in an interview with the JoongAng Ilbo in 1999. “And that was a big shock to me.”

Unlike Japan, Korea had no channels where consumers could raise their voices on consumer products to big companies, Chung explained.

In 1968, she helped establish a consumer complaints center under the YMCA. Two years later she established the Consumers Union of Korea, and in 1978 the Korea National Council of Consumer Organization with six private consumer rights groups.

She was deeply involved in the passage of a consumer protection law in 1979.

Chung, who served as chief of the politics desk and as an editorial writer at the Hankook Ilbo, quit in 1980 to devote her time to consumer rights.

She also contributed to the National Assembly’s passage of a bill that designated Dec. 3 as Consumer Rights Day in 1996 and received the Moran medal, the second-highest civil honor, the same year.

She served as chair of the Korea National Council of Consumer Organization four times.

Chung served as chairman of the Consumers Union of Korea for 34 years, leaving the post on Jan. 24.

In 2002, she was appointed chairman of the board at Kyungwon University in Gyeonggi.

When President-elect Park Geun-hye created Future Hope Alliance, a splinter group largely composed of Park loyalists, the same year, Chung was one of the members who participated in establishing the new political party.

“There was a time when companies wielded absolute power, and Chung was the person who laid a foundation for consumer rights in Korea,” said Kim Yeon-hwa, chairman of the Korea National Council of Consumer Organizations, which is charge of Chung’s funeral.

Kang Jung-hwa, chairman of the Consumers Union of Korea, who worked with Chung since the 1980s, said Chung, who never married, habitually reminded colleagues that she didn’t have a family to look after so she could concentrate on her calling.

“She fully devoted herself to the consumer movement,” Kang said. “She could’ve carved out an easy life as an elite female figure, but she was always in the field.”

Kim Jae-ok, chairman of Consumers Korea, recalled Chung as “a dominant player who introduced consumer consultation and changed all perspectives by advocating for the side of the consumer in a country where adulterated food and cosmetics are rampant.”