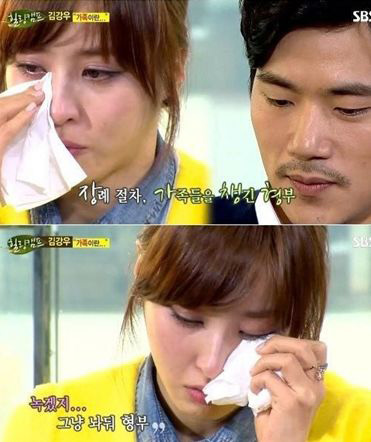 Han Hye-jin shed tears on her TV show “Healing Camp,” while she revealed her fondness for her brother in law, actor Kim Kang-woo.
In the episode that aired Feb. 18, the show dedicated to Kim had Han telling some personal tales of hardship.

“After my father passed away, he really rose up as the son,” said Han. “He’d make sure we’d all had some water and sent us home while he kept vigil at the funeral altar,” explained the 31-year-old who saw her father pass away last November.

After wiping away her tears, Han went on to say that as recent as during the Lunar New Year, Kim had accompanied Han and her family to visit the deceased’s burial ground.
“There was ice frozen over the grave and we just thought it’d melt away soon,” said Han who said she was touched when her brother-in-law took a clothes hanger from the car and became chipping away at the ice.
“I just can’t believe how blessed we are by him,” said Han.
Kim married Han’s sister Han Moo-young, also an actress, back in 2010.
By Carla Sunwoo [carlasunwoo@joongang.co.kr]