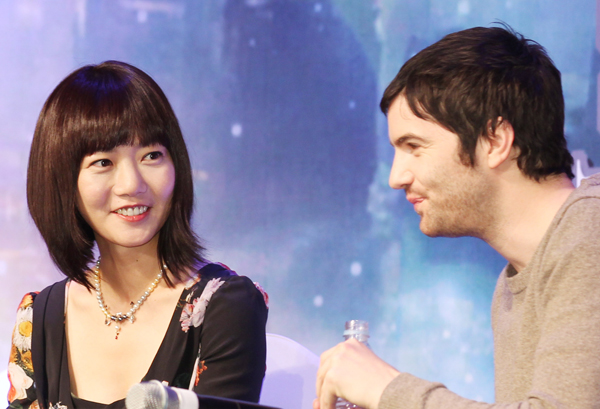 There may be a multicultural union between Hollywood and Hallyuwood soon enough. On Tuesday, U.S. celebrity news blog Lainey Gossip said “Cloud Atlas” co-stars Bae Doo-na, 33, and Jim Sturgess, 34, may have more than a movie in common.

Although the posting started off linking Sturgess to “Twilight” beauty Kristen Stewart, the Web site posited that Bae was Sturgess’ “new girlfriend.”

To prove the point, pictures of the two walking with arms linked in Venice Beach, California, a couple of weeks ago were posted. The fact that the two played lovers in the Hollywood sci-fi film and shared a “super hot sex scene” was also mentioned.

Apparently, during press conferences for their movie, Sturgess helped Bae answer questions in English, and the two were often spotted indulging in a private joke or two, complete with secret giggles here and there.

When Sturgess joined fellow cast members for a promo visit to Korea in December, Bae admitted she showed him around town.