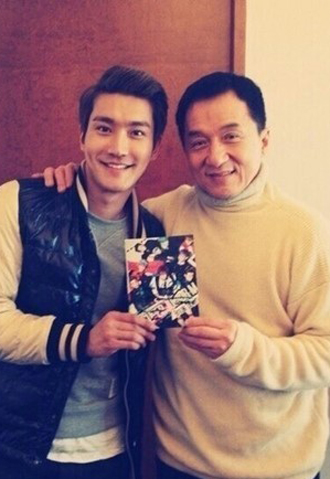 It seems that being in an idol band doesn’t mean you can’t be star-struck.
On Feb. 19, Super Junior’s Choi Si-won took to Twitter to post a picture of himself and Jackie Chan.

He also commented, “was such a great time with jackie chan. always our hero!” In the picture, Choi can be seen giving Chan a Super Junior M album on CD.
The two are set to appear together on the variety show “Running Man” soon.
The picture was taken when Chan was visiting to promote his latest film “Chinese Zodiac Heads.”

Choi has recently been busy touring with the sub-unit of his group, Super Junior M.