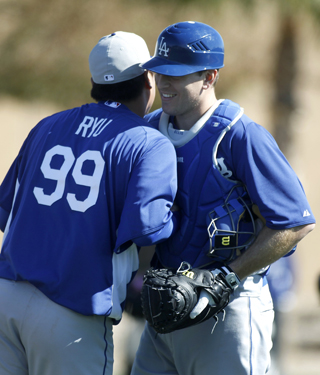 GLENDALE, Arizona - The catcher in charge of the Los Angeles Dodgers’ vaunted pitching staff spent part of his offseason learning how to squat.

But after a slow, winding path through the minors led him to one of the majors’ highest-profile catching jobs this spring, Ellis always wants to improve. So he worked on the mechanics of squatting, standing and even sitting in a chair back home in Milwaukee during his recovery from offseason knee surgery, determined to reduce wear and tear with help from a therapist who used video to demonstrate his mistakes.

“Just trying to make these legs last as long as I can,” Ellis said after the Dodgers’ Wednesday workout.

“Basically, every time I went down before, I was putting stress on my meniscus,” he said. “I didn’t even know about it, so now I’m just letting my knees stay in line with my toes at all times. Once the games start, I’ll take it out of my brain, but I try to be conscious of it.”

Ellis has built an unlikely career on perseverance, outlasting bigger names and hotter prospects over the past decade to become Los Angeles’ starting catcher. Although his $2 million salary is less than 1 percent of the Dodgers’ lavish payroll, he should have the ball in his hands more than anybody on the roster as the receiver for the high-priced rotation headlined by Clayton Kershaw, Zack Greinke and Josh Beckett.

“I don’t want to make it about me, as far as hard work paying off,” Ellis said. “There was a plan for me, and the timing for me was to be here for this. I wanted to rush it. I wanted to be up here years ago, and the organization thought differently. I’m thankful that they had a plan for me as well. This is it. I was supposed to be here now with this team, with this pitching staff.”

Until last year, Ellis was always a backup plan. Now, the Dodgers are so confident in Ellis that they haven’t chosen a clear backup for him.

Ellis, who turns 32 shortly after opening day, knows he could be considered a surprising heir to the job once occupied by the likes of Mike Piazza, Roy Campanella, Johnny Roseboro, Mike Scioscia and Steve Yeager. He was an 18th-round pick who had never figured among the Dodgers’ top prospects.

“You don’t sell guys like A.J. short,” Dodgers manager Don Mattingly said. “Guys that are willing to work and work and slowly, continually get better, you don’t want to sell that guy short, because we don’t know where the ceiling is.” AP