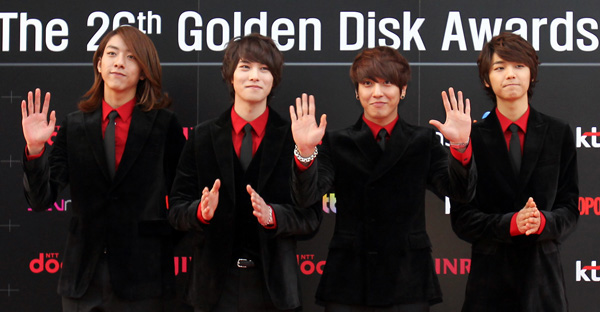 CN Blue is about to begin its “2013 World Tour.” For the last six weeks, the band has been putting up performances for fans at home, and the first leg of its international tour will be held at the Taipei Arena in Taiwan on April 6.

The band’s popularity in Taiwan is at its highest level as of late. According to G-Music, one of the most popular music Web Sites in Taiwan, the band’s the newly released album “Re:Blue” topped the Asia c
hart based on data collected from Feb. 15 to 21.

On KKBox, another Taiwanese music Web Site, the boy band also ranked at the top of the K-pop chart with its song “I’m sorry.” The band’s success story doesn’t end there as six others songs of the quartet are also hovering high on the new K-pop chart.

After performing in Taiwan, CN Blue will continue its tour in Thailand on May 4 and Hong Kong on May 11, with more on the way.