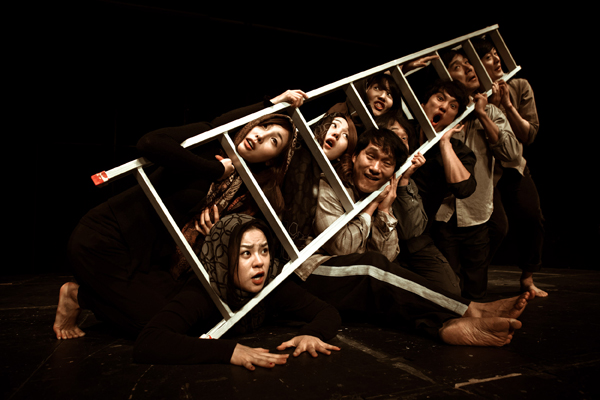 Actors of the Flow Theater Company turn a ladder into a train carriage in which they will describe the sometimes comical but mostly tragic lives of illegal immigrants from Mexico. Their play, “Donde Voy,” is based on “Singers’ Journey” by Mexican playwright Hugo Salcedo. It will be staged at the Daehangno Arts Theater from March 14-17. Provided by Flow Theater Company


“Donde Voy” will be introduced to the nation by the Flow Theater Company this week, bringing a heart-wrenching tale of illegal migrants to Daehangno Arts Theater from March 14-17.

The story of 18 Mexican workers who die in a train wreck on their way to the United States is based on the play “Singers’ Journey” by Mexican Hugo Salcedo, who won the Tirso de Molina prize for the work in 1989. He was the first foreign national to receive the prize from the Spanish government.

According to the theater company, “Donde Voy” will be the first feature-length Mexican play to be presented in Korea.

The 100-minute work has previously been performed at venues in the United States, Europe and Latin America.

“Not many Koreans know about Mexican plays, and we want to show that there are actually good ones to notice,” said Kim Yeon-jeong of the Flow Theater Company.

“Donde Voy” faithfully follows the plot of the original but adds more comedic elements, according to director Song Hyun-ok.

The comedy will be accentuated by the Flow Theater Company’s focus on body movement.

“But what looks like comedy is also part of the lives of these people,” Song added. “It is only that their lives, which could have been normal, ended abruptly in tragedy.”

Song said she chose “Donde Voy” instead of the “Singers’ Journey” as the title of the play after considering the popularity of the American pop song of the same name.

“Donde Voy,” by Mexican-American Tish Hinojosa, is also about Mexican immigrants who decide to make new lives in the United States.

The director said she will use the song and its sad melody in the prologue of the play. Actors will also sing it on stage during several scenes, she said.

Song said she decided to stage the play in Korea after an encounter with Salcedo when the Mexican playwright was a visiting professor at Seoul National University’s Institute of Latin American Studies for six months until February 2011.

“Salcedo liked the idea of doing it in Korea very much and wants to see how Koreans will interpret his work and enjoy it,” Song said.

The story of illegal migrants will also feel relevant to Korean audience members with regard to North Korean defectors, the director said.

A growing number of Asians migrants who are coming to Korea at the risk of death will also help Koreans relate to the story, she said.