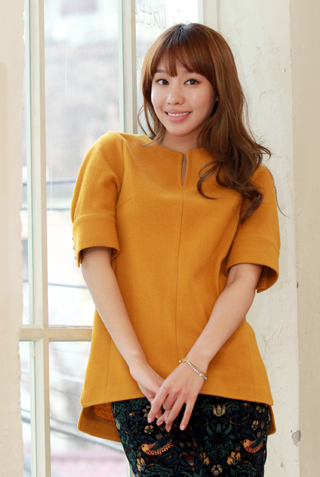 Kim Ah-joong brought fans to a facility for unmarried mothers in a rare domestic fan meet early last week arranged to mark the ninth anniversary of her debut, her agency said Saturday.

“Before celebrating the anniversary of the debut on March 12, Kim Ah-joong spent meaningful time with fans who have steadily supported her,” said the agency, Namoo Actors. “It was the first time in four years that she met with local fans.”

Her fan clubs, Cocoa and DC Inside Kim Ah Joong Gallery, volunteered with Kim at a facility for unmarried mothers where Kim frequently donates her time.

Kim, 30, starred in the sexy rom-com “My PS Partner” as Yoon Jeong who falls in love with Hyun Seung (played by Ji Sung), a stranger with whom she has phone sex after accidentally dialing the wrong number.

The movie has attracted more than 1.8 million moviegoers since its release in December, according to the Korean Film Council. This month, she will embark on an overseas volunteer mission in Liberia as part of an SBS program, “Hope TV,” the agency said.