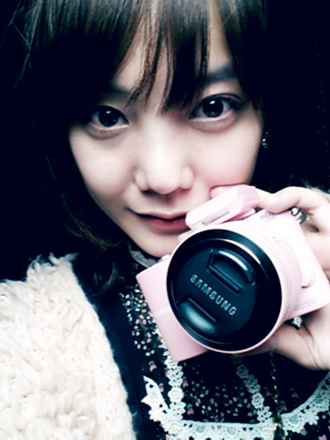 Actress Ko Eun-a has rehashed the rumor surrounding herself and singer Kim Jang-hoon by making public a gift from the singer.

On March 3, Ko uploaded a picture of herself on Twitter with the caption “Present from Jang-hoo, a pink camera. Thank You!”

Ko also promised Kim that she’d take a lot of pictures with her new gadget.

In November, the two worked together on Kim’s music video, and when pictures of the two enjoying a drink surfaced online, many assumed they were dating.

Kim also made the relationship out to be more than it was by announcing,
“Who knew a day like this would come, between me and Ko Eun-a. I’m seeing her again next week.”

He then uploaded a picture of the two sharing a drink together and added, “but don’t worry, it’s not like that.”

Then later he added, “So I make it public but no one believes it. I texted her asking, ‘Do I really look that old that it’s impossible to think we are dating,’ and she says ‘Should I tweet that we are dating?’”

After the misleading posts, both parties denied they were dating.