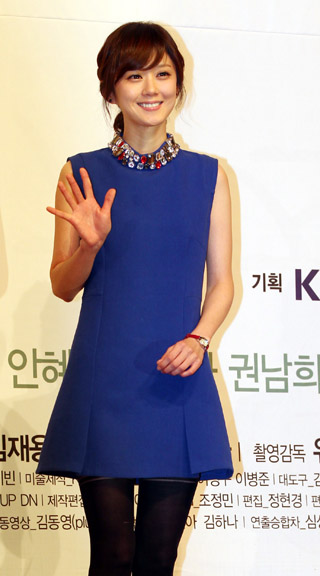 Much-loved Hallyu star Jang Nara had a surprise birthday party with her Chinese fans last week, prior to her birthday on March 18.

Her fans visited her in Zhejiang, in the east coast province of China, while she was filming a Chinese drama “Red Palanquin,” which was scheduled to go on air early next year. The fans came mostly from Hangzhou and Guangzhou, major cities near the province.

According to her fans’ blog Narajjang.com, fans visited wearing the same light blue T-shirt with Jang’s caricature and bearing gifts and sweets to celebrate her birthday.

It was indeed not the first surprise birthday party she was treated to during the show’s shooting.

She had other fan clubs from other Chinese cities including Chongqing, Xian, Jungjiu and Anhui, visit the set last month.

In the new drama, Jang will play a lead character named Riti born with six fingers in a family that hosts wedding ceremonies in the early 20th century.

“Red Palanquin” is the first Chinese drama Jang is doing in two years since “Pao Ma Chang” in 2011.

In between the Chinese shows, Jang starred in KBS drama “School 2013,” which ended in January.