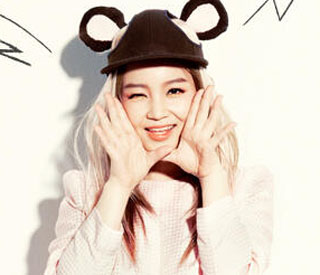 Former “Kpop Star” contestant Lee Hi has set out to make it on her own, releasing half of her first solo album yesterday.

Five songs on “First Love” are now available at local music outlets, including the title track.

In the music video accompanying the release, Lee puts on a jolly persona, sports a colorful hair band with a teddy bear on top and plays with a giant stuffed teddy bear.

The video stands in contrast to Lee’s debut single last year, a retro-soul song called “1, 2, 3, 4.” In the video for that release, Lee wore more muted black and white tones.

The music in “First Love” combines jazz, rhythm and blues, which are seldom used in Korean pop music.

The album’s five additional songs, including another title track “Rose,” will be released March 21.

Lee’s album was produced by Yang Hyun-suk, president of YG Entertainment, with contributions from the company’s best producers, including Teddy, Tablo and Choice37.