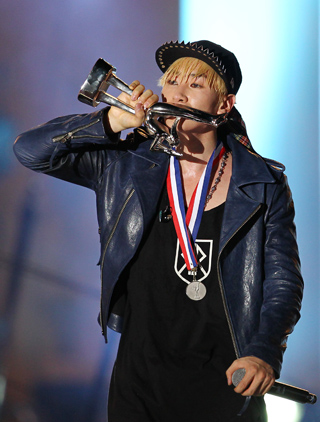 Eunhyuk, a member of popular boy band Super Junior, expressed his discomfort over a hacking of his Twitter account.
“My account has been hacked,” tweeted Eunhyuk on Monday.
“There has been a mention that I didn’t post and was deleted, and now I’m following [Kim Hee-cheol] whom I didn’t follow before? Who is that? It’s really too much.”
Then to another tweet from a producer at MBC claiming to have seen Eunhyuk’s mention re-tweeted on his account often recently, Eunhyuk said he has not been reposting anyone for the past two weeks.
Hacking into a celebrity’s account is not news. Actress and singer Uhm Jung-hwa had her accounted hacked in May and saw advertisement of diet supplements being posted on her account.
Other celebrities including Lee Gi-kwang of boy band Beast, Sohee of Wonder Girls and singer Seo In-guk has expressed their discomforts over the similar hacking incidents before.