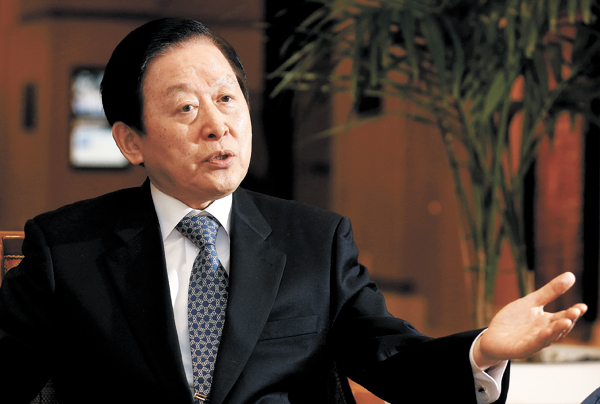 If Pyongyang carries through with its threatened fourth nuclear test, Beijing can play a powerful card, said former Unification Minister Kim Ha-joong, who estimates 70 percent of North Korea’s food and crude oil is provided by China.

Kim, 66, the longest serving ambassador to China, was in Beijing for seven years starting in 2001.

Kim served as minister of unification from 2008-9 and was a former presidential secretary of foreign affairs and national security. He wrote the best-selling books “Kim Ha-joong’s China Story” and “Ambassador of God.”

A diplomat for 36 years, Kim sat for an exclusive interview with the JoongAng Ilbo on Sunday.

A. Xi Jinping has plenty of support from close aides of Jiang Zemin, so it appears that compared to President Hu, Xi would work more confidently toward achieving his goals. But even if he wants to change the policy, he would not express it outwardly immediately and use his hidden card only at a really important moment.

More specifically, what card can he play?

About 70 percent of the supplies North Korea uses - including food, oil and other necessities - are transported back and forth from China and the North through 10 bridges and railroads connecting the two countries. Even if they are just partially blocked or regulated, it will have a large impact on North Korea.

China, at the United Nations Security Council, approved of the sanctions against North Korea.

As North Korea’s threats to the international community become stronger following three nuclear tests, China cannot help but step up as a responsible nation. The North Korean situation made it like that. China’s support for the UN Security Council resolution is not a total sanction on North Korea, but a limited one. If North Korea continues with its provocative actions in the future, it will be difficult for China to continue being patient.

But doesn’t China, which has nuclear weapons, tolerate the North’s nuclear armament despite its infringing upon U.S.-Russian nuclear arms control agreements?

China, considering its economic capability and skills when it developed its nuclear program, thought initially in a laid-back manner that “North Korea at its level cannot develop nuclear weapons and would not be a threat.” But as a country that shares a border with North Korea, China feels threatened by the North’s unpredictability.

Have efforts to denuclearize after the first North Korean nuclear crisis in 1993 failed?

Though we do not know if North Korea has nuclear weapons, the North has lost more than it has gained. The real loser is North Korea. Over 20 years, North Korea has disappointed all of the international community, not only South Korea and United States, but China who has tried to help, and has lost trust to a level from which it will be difficult to recover.

The opening of diplomatic relations between South Korea and China (in August 1992) became grounds for the first nuclear crisis?

Toward the end of 1992, the North and South Korean talks were halted, and in March 1993, North Korea pulled out of the Treaty on the Nonproliferation of Nuclear Weapons (NPT). Such a series of events all started right after the establishment of diplomatic relations between Seoul and Beijing in September 1992, so it is possible to view that as a cause of the first nuclear crisis.

Has unification with the North been pushed back because of its possession of nuclear technology?

Unification will occur when circumstances become more mature, so there is little chance that just because North Korea carries out a few nuclear tests that it will become more far off. If North Korea were to excessively push for nuclear power, it would rather exhaust its excessively lacking national power and push further away the possibility of reunification. But it is important to prepare for unification with one heart and one mind.

Does China truly want unification of North and South Korea?

The Chinese government has stated that the Korean peninsula belongs to the Korean people, and it hopes the unification of the peninsula must come with the wish of the Korean people in an autonomous, peaceful manner. China’s greatest leaders always said to our greatest leaders that they support the peaceful unification of the North and South Korea. We can trust this attitude and, when needed, earn China’s cooperation. The Chinese since ancient times have experienced the rise and fall of numerous nations and are sagacious people. So following the general trend, it is my opinion there is little chance they would try to block unification of the North and South Korea.

Will the Park Geun-hye administration succeed in her trust-building process with North Korea?”

The new administration has stated that it will advance relations with North Korea (through proposing trust in the Korean Peninsula), so North Korea has to start being receptive. Is it all right for North Korea to - like before - ask the new administration to come with heads bowed? The process of trust depends on how much North Korea lives up to it. If they don’t, the breathing room of the new government will be narrowed and any special results will be difficult to achieve.

There have been talks of our own nuclear armament as we are taken hostage by North Korea nuclear possession.

Because the new government’s policy is not coming out, there are lots of arguing back and forth. The new administration needs to quickly decide on its internal policies and let the people know. The North Korean nuclear problem is serious, but we have to respond objectively and calmly.

In U.S. and China relations, what sort of foreign policy do we need to seek?

We need to simultaneously strengthen our alliance with the United States and strategic cooperative partnership with China. We need to work on making sure that the two relations hips are not contradictory but complimentary, and we need to have a constructive role between the two countries so that they are cooperating and not opposing each other.