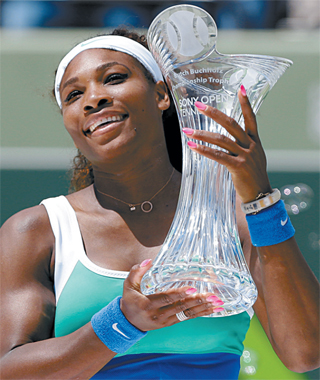 Serena Williams lifts the trophy after winning the Sony Open on Saturday, in Florida. [AP/NEWSIS]

If her victory celebration on the stadium court seemed well rehearsed, it was. She earned a record sixth Key Biscayne women’s title by beating familiar foil Maria Sharapova 4-6, 6-3, 6-0 at the Sony Open on Saturday.

Sharapova playing nearly flawless tennis for an hour, before her serve and groundstrokes began to lose steam. Williams swept the last 10 games and faltered only during the trophy ceremony.

At 31, the No. 1-ranked Williams became the oldest female champion at Key Biscayne. She won the tournament for the first time since 2008 and surpassed Steffi Graf, a five-time champion.

Sharapova didn’t sound thrilled by the prospect, with good reason. She has lost 11 consecutive matches against Williams and hasn’t beaten her since 2004.

The men’s finalists are familiar foes, too. On Sunday (Eastern Standard Time), 2009 champion Andy Murray will play frequent practice partner David Ferrer, who is trying to become the first Spaniard to win the men’s title.

The women’s final began at high noon in sunny, mild weather, and the quality of shotmaking matched the conditions in the early going. The aggressive style of both players made for slam-bang points, and the occasional long rallies had a near-capacity crowd gasping at their ferocity.

As they battled from the baseline, Sharapova built a lead by keeping Williams on the defensive, and kissed the line with a winner on consecutive points to break for a 3-2 advantage in the second set.

“I just was like, ‘Serena, are you really going to get to the final and not play up to your potential?’” Williams said. “I don’t think I was as energized as I could be.”

Then came the turnaround. Williams began feasting on Sharapova’s tentative second serve and broke back at love, then took advantage of two double-faults by Sharapova to break again.

Williams lives two hours up the highway in Palm Beach Gardens, and she made herself right at home in the final set, losing only 10 points.

“That’s why she’s No. 1 in the world,” Sharapova said. “She’s really capable of doing that. I was controlling a lot of the points in the first set and the beginning of the second. Then toward the end, I wasn’t there.” AP