Burn victim is reunited with her U.S. soldier-savior

Burn victim is reunited with her U.S. soldier-savior 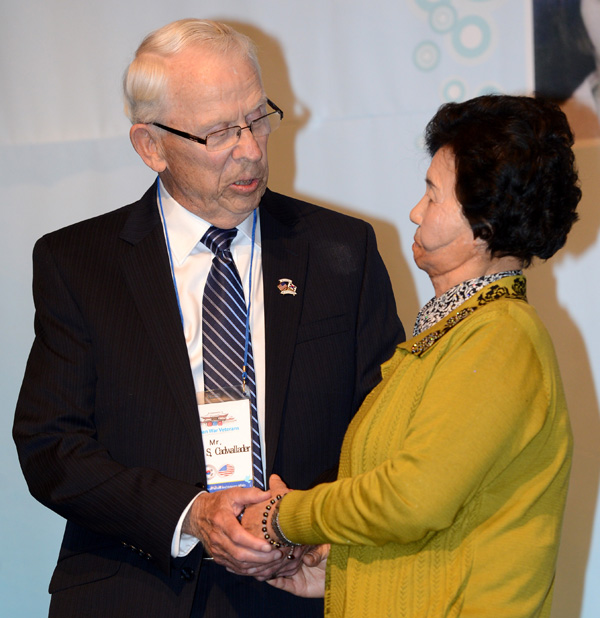 Richard Cadwallader, 82, left, greets Kim Yeon-soon, 72, during a reunion after 59 years at the Lotte Hotel World in Songpa District, southern Seoul yesterday. Cadwallader, who served in the U.S. Air Force during the Korean War, helped Kim survive horrific burns she sustained as a 12-year old girl, the Ministry of Patriots and Veterans Affairs said. [NEWSIS]

An elderly American man in a formal suit slowly walks into a hall accompanied by his wife, a warm smile on his face. A Korean woman who’s not much younger approaches him, hugs him, and says repeatedly “I thank you and thank you.” She has tears in her eyes. The man embraces her and grabs her hands tightly. The sound of camera shutters fills the room.

The two were meeting to celebrate the aversion of a tragedy 60 years ago, at the end of the 1950-53 Korean War. The man is Richard Cadwallader, an 82-year-old Korean War veteran from Arizona. The woman is Kim Yeon-soon, 72, who says she wouldn’t be here if it wasn’t for Cadwallader.

They were reunited yesterday at Lotte Hotel World in Songpa District, southern Seoul.

On a cold night in 1953, Richard Cadwallader heard a knock on the door of his Quonset hut when he was serving at the U.S. Air Force’s 8th Communications Squadron in Suwon, Gyeonggi.

Cadwallader opened the hut’s door to find a mother holding her 12-year-old daughter in her arms. The mother and daughter were from Maehyang-ri, a rural town in Hwaseong, Gyeonggi.

An accident had occurred in their home. The daughter, Kim Yeon-soon, had tried to feed a fire with gasoline from a can. The can exploded. She suffered horrendous burns and the mother carried her eight kilometers (five miles) to the Air Force base for help.

“Starting at her waistline, she had horrific 3rd degree burns up the front of her body to her chin,” recalled the former Air Force man.

There were no “hospitals, no doctors, no pain medication” in Suwon, Cadwallader recalled and he figured “the only thing that would save her life is to get her to a military hospital” in Busan.

Cadwallader and his crew quickly arrange to get Kim flown to Busan, where a major military hospital was located, by helicopter.

“When we saw her take off on the helicopter, we were relieved and excited at the same time, knowing that she was going to get the best care available,” said Cadwallader.

“Without his help, I would not have been able to walk ever again,” recalled Kim.

Cadwallader visited Kim in the Busan hospital with sweets and checked the progress of her wounds. The Air Force man soon became an “American father” for Kim.

“At that time, I called him ‘American dad,’?” she recalls, “and I always waited for his visiting day.”

“The last time I saw him was when I was in a hospital near the Cheongnyangni area in northern Seoul in April 1954, when he stopped by to see me.”

Cadwallader remembered yesterday the young girl with “remarkable courage who endured unbelievable pain” without tears or complaint. He recalled her mother as showing “enormous and unconditional love” for her daughter.

“I can’t tell you how brave this woman was 60 years ago,” he said “She and her mother were two of the most courageous people I have ever known.”

Asked what he wishes to do during his six-day stay in Korea, the war veteran said: “Just hug her, that’s all.”

When asked about the development the country has undergone since he left 59 years ago, the veteran said, “I’m really impressed with what you’ve done with your country. You need to be proud of that.”

Cadwallader, who said the memory of Kim never faded, sent a letter to the Ministry of Patriots and Veterans Affairs to find Kim, whose full name he couldn’t recall.

Officials announced in late January they located Kim and arranged the reunion.

In recognition of his selfless efforts on behalf of Kim, the Veteran Affairs Ministry awarded Cadwallader an Appreciation Plaque.