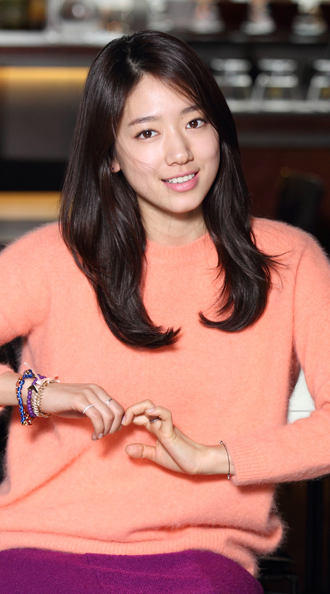 Park Shin-hye of recent hit movie “Miracle in Cell No. 7” will take a leading role in an upcoming SBS drama tentatively named “One Who Wants to Wear a Crown Must Bear the Weight - The Heirs,” according to her agency SALT Entertainment.

Lee Min-ho, famous for his appearance in “Boys Over Flowers,” will be her counterpart in the drama written by Kim Eung-suk. Kim has written the scripts for numerous hits on SBS including “Gentlemen’s Dignity” last year, “Secret Garden” in 2010 and “Lovers in Paris” in 2004.

“I longed to work with Kim as I watch her charming work, and I’m so happy and excited to have my dream come true,” said Park.

Park is one of only a few Korean actresses to meet fans overseas recently. She traveled abroad after rising to fame in the drama “You’re Beautiful” (2009).

Last month, Park visited the Philippines and Japan to celebrate her 10th year in the business. She danced and sang from the soundtracks of her dramas. She will continue to Beijing and Shanghai in June.