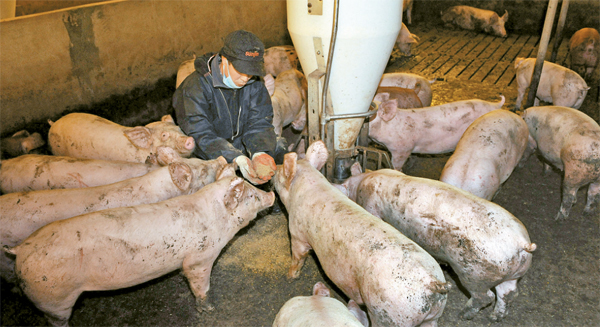 Choi Jun-gyu, a hog farmer in Hongseong County, South Chungcheong, feeds hogs on Tuesday. Under mounting financial strain amid falling pork prices, the 55-year-old farmer said it is even becoming financially burdensome to dispose of animal waste. By Kim Seong-tae

Some 6,040 hog farms in the country have been struggling with falling pork prices.

Hog producers are facing another challenge two years after they were hit with nationwide foot-and-mouth disease.

Dongam Hog Farmer Association, comprised of five operations in Pocheon, Gyeonggi, raises about 35,000 animals, which is considered large for the region.

Despite its once booming business, farmers there say they now have to worry about the cost of waste disposal, a testament to the mounting financial strain on the industry.

“It costs 15,000 won ($13.4) to dispose of one ton of waste, which is now burdensome. We have no choice now but to leave the waste inside,” said one farmer who requested anonymity.

Jang Young-kyu, head of the Dongam association, said they lose 300 to 400 million won every month due to falling pork prices. Over the past six months, the association has accumulated 2 billion won of losses.

The worsening financial situation is shared by other hog producers elsewhere in the country.

Ham couldn’t pay the 500 million won he owed to a feed distributor.

“Due to financial difficulties, a number of farms have put their hog farms up for sale. More and more hog farms are destined to go bankrupt [if the current market price continues],” said Jung Dong-woo, director of the livestock management team at Hongseong County Office.

Local government officials in charge of livestock management, however, said part of the responsibility lies in farmers themselves as they indiscriminately increased the number of livestock animals after the infectious viral disease came under control two years ago, when pork prices remained high.

The total number of hogs raised for consumption increased by over 2 million in little more than a year, from 7.78 million in September 2011 to 9.91 million last December.

In its demand for government measures to subsidize the struggling hog industry, the Korea Pork Producers Association began a sit-in protest in Yeouido, central Seoul, Monday.

The association says in its statement released Monday that more than eight in 10 pig farms will go bankrupt if the current situation continues for the next three months.

“On average, each farmhouse in the country has lost 160 million won [over the past year], while the whole industry has suffered 950 billion won in losses [over the same period],” claimed the association.

Experts say the government should be more active in purchasing the over-supply of hogs to achieve a supply-demand balance.

Calls have also grown for the government to take action to fix the distorted market distribution process, as the retail sale price remains unchanged despite a steep drop in the wholesale price.

“While it is necessary to improve the current distribution process, a change in consumer patterns is also required. Consumers now only shop for a particular part of the animal, such as pork belly,” said Ahn Sang-don, senior researcher at the Nonghyup Economic Research Institute.