The high price of raising a well-educated child

The high price of raising a well-educated child 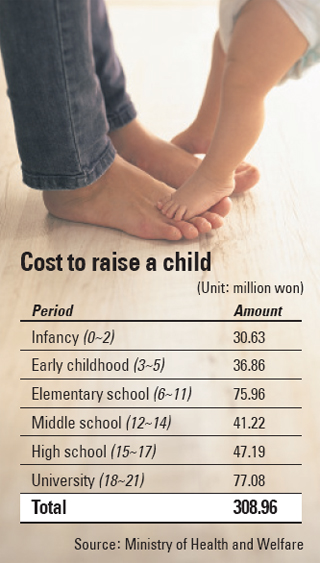 In the African proverb, it takes a village to raise a child. In Korea, it takes over 300 million won ($263,400), from the moment the child is born until the day he or she dons a university graduation gown.

The Ministry of Health and Welfare yesterday reported Korean parents spend a total of 308.96 million won on average to raise a child for 22 years, or until they finish college, a significant increase of 46.92 million won from the figure recorded in 2009 at 262.04 million won.

The ministry also reported a single household spends 1.18 million won monthly on average for each child, showing a more than 50 percent increase from 748,000 won recorded in 2003.

Of the total monthly spending, private tutoring accounted for the largest part of the costs at 228,000 won, while spending on food followed with 204,000 won, proving private education in this education-fevered country remains the most financially burdensome parental task.

The survey reflects a unique aspect of Korean parenting, which lasts well past their children becoming adults and entering college, even until they get a job after four years of university education.

Among the survey respondents, less than one in 10, or 8.9 percent, said their children should be on their own after they graduate from high school.

“Over 90 percent of respondents said they should take care of their children until they graduate from college, while less than 10 percent said children should be on their own after high school,” said Kim Seung-kwon, a senior research fellow at the Korea Institute for Health and Social Affairs.

Among the surveyed 10,058 parents, 20.4 percent of them said they are willing to provide for their children until they are married.

In a testament to the long-lasting Korean parental care, of the total 308.96 million won spent to raise a child, 77.08 million won on average was spent on college education, the largest cost, when a child is at age 18-21.

“Because of a totally different parental mindset, we can’t simply compare our parental costs with those in other developed nations where children are mostly on their own after high school,” said Kim.

The senior researcher added parental costs would “rise much further” if spending on arranging a marriage is taken into account, since many parents in the country “at least pay some of the related costs.”

The study shows it costs 75.4 million won for a man to arrange a wedding and 52.2 million won for a woman. Men are found to pay on average 38.6 percent of the entire marriage costs, including the new apartment and furnishings, suggesting the rest of the cost is paid by their parents.

Women turn out to pay a higher proportion of the costs with 41.5 percent.

The ministry’s finding was based on a joint study survey conducted last year of 10,058 people with the Korea Institute for Health and Social Affairs.