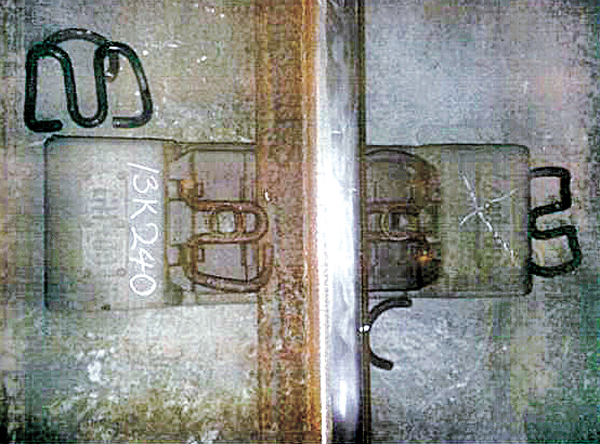 Broken clamps, which are core components to prevent trains from derailing

According to the documents that stated the line’s repair history, which the JoongAng Ilbo has exclusively obtained, about 400 broken clamps, which are core components to prevent trains from derailing, were broken between April last year to this March.

“It is a very important component. The operator should consider halting the line and investigating the cause of the breakage when more than two components are broken continuously,” an official from the facility management division from the Korea Railroad Corporation, or Korail. “We generally test the component more than two million times by giving it the same level of shock. It means definitely something is wrong if that many of them are broken.”

The Shinbundang line started operating in October 2011, servicing an average of 100,000 passengers per day. It is the first fully automated subway in Korea.

“We immediately ordered officials to launch a precision safety diagnosis,” Suh Seoung-hwan, minister of land, infrastructure and transport, said in the Land and Transport Committee meeting held at the National Assembly yesterday, the day the JoongAng Ilbo reported the line’s problem.

“We judge that the condition of the line isn’t normal as many components were broken in some particular sections. We are also considering forming a joint safety diagnosis team composed of railroad safety experts from private and government organizations.”

Earlier in the morning, the Transport Ministry issued a press release regarding the JoongAng’s report and stated that they have dispatched seven officials to the Shinbundang line to see whether it is safe to continue operations.

Sources in the ministry said that the dispatched officials also received documents that include the history of clamp replacements.

“We are currently looking into whether the defects of the components are caused by problems in the rail construction or the problem is the components themselves. But because we have to conduct a precision safety diagnosis, it will take time to find out the exact cause.”

The German-manufactured clamps were used for an airport railroad in Delhi, India, which also had similar problems in July last year, causing the country to stop operating the line for six months.

About one million of these components will be used for the Honam Railroad that will connect Seoul and Mokpo, South Jeolla. The line will be completed in 2017. Poor management of the problem by the operator of the line, Shinbundang Railroad Company, is under fire as well.

In late April last year, six months after the line began operations, the operator found its first broken component on the 12-kilometer (7.5-mile) section headed south from Gangnam to Jeongja.

They found four more in May, five in August, nine in October and the number of damaged component rapidly increased in the next two months, as they found 116 in November and 119 broken components in December. The operator held its first official meeting to establish measures in March, almost a year after they found the problem.

The operator said they immediately replaced the broken components every time they found one, but that wasn’t the ultimate solution.

“We think there are no safety problems because only a part of the components were found broken,” an official of the Shinbundang Railroad Company claimed. “We sent the damaged components to a research institute to find the cause of the damage.”

“It definitely is a serious problem,” said Kang Bo-sun, a professor of railroad engineering in Pai Chai University. “A neutral and independent safety diagnosis team must be formed to check the problems.”

“The component shouldn’t break because it maintains trains’ safety as it prevents them from derailing,” said a researcher from the Korea Railroad Research Institute (KRRI). “I just can’t understand that that many of components are broken on a year-and-a-half-old line.”

The repair history documents the JoongAng Ilbo exclusively obtained showed that most of broken components are from five curves on the 18-kilometer-long Shinbundang line, and about 260 tension clamps were broken on the 13-kilometer section bound for Gangnam.

“It won’t cause a serious accident if one or two components are broken, but if more than 10 of them are broken in a row a train could be derailed,” an official of the KRRI said.

The Shinbundang Railroad Company and Doosan Engineering and Construction, the builder, said possibility is low the components were broken due to poor construction because they have checked possible defects since they found the damage on the component, but haven’t found any.

But the company who imported the components from Germany and supplied them to the builder said, “There might be some faulty products, but we are sure that the quality of the component is fine as it has passed performance tests.”