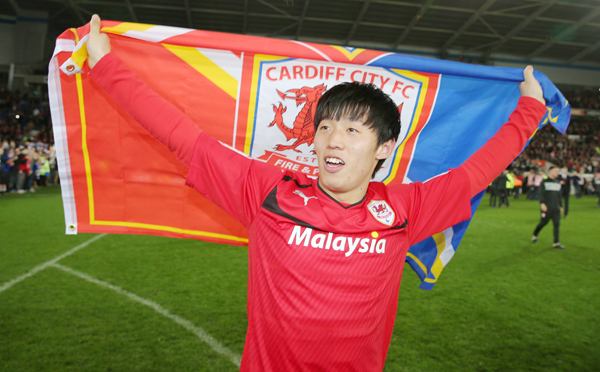 Cardiff City’s Kim Bo-kyung of Korea celebrates his team’s promotion to the Premier League after its Football League Championship match against Charlton on Tuesday at Cardiff City Stadium in Cardiff, Wales. The final whistle sparked memorable scenes in the Welsh capital because the team last achieved promotion to the top tier of English football in 1962. [AP/NEWSIS]

Kim Bo-kyung of Cardiff City will become the 12th Korean football player to play in the English Premier League as his second-division team has secured a berth to the top division with three games left in the season.

Cardiff City had a scoreless draw with Charlton Athletic at Cardiff City Stadium yesterday in Korean time. With the point, its 84th ?of the season, the Welsh team ?is guaranteed a top-two finish in the Football League Championship. Third-place Watford is 13 points behind.

Kim, who signed a three-year contract with Cardiff City in July, scored two goals and an assist for the team this season. The 23-year-old midfielder turned professional in Japan in 2010 and had played for Cerezo Osaka before moving to Cardiff City. He is a member of the Korean team that won the bronze medal during the London Olympics in August.

“I am happy to be part of a historical moment,” Kim said in an interview with News Y, a Korean broadcaster. “It is difficult to be promoted to the Premier League, but remaining in it is more difficult.

“My goal is to make a good performance to help the team stay in the middle of the table or upper than that in the Premier League next season.”

Cardiff, which has missed the playoffs for the past three seasons, will play in the top flight next season for the first time since 1962.

Their promotion was greeted with joyous scenes at the final whistle with players and fans celebrating on the pitch.

“There are a lot of smiley happy faces and it’s going to be a long night in Cardiff, I think,” manager Malky Mackay told Sky Sports at the Cardiff City stadium.

“I’m delighted for these people. There are a lot of people here who have gone through a lot of hard times and this is for them,” added the Scotsman who took over the team in 2011.

“The staff of the football club, the back office, the training ground staff, the directors and our owners, these players and these fans and the people of Cardiff, it’s a night for them,” added the former Watford boss.

The principality now has two representatives in the Premier League with Cardiff joining arch-rivals Swansea City, who won the English League Cup final this season.

“I am lost for words right now. We thoroughly deserve that if I’m honest,” Cardiff defender Mark Hudson told the BBC.

“The consistency we’ve had this year, top since November, and now we’re promoted. We’ll celebrate now, then go for that title.”

Cardiff is well placed to claim the silverware, with 84 points from 43 matches giving them a seven-point lead over second-placed Hull City with three games left.

Hull lost, 1-0, at Wolverhampton Wanderers, who moved out of the relegation zone, while third-placed Watford remain six points off the second automatic promotion spot after going down by the same score at losing FA Cup semi-finalists Millwall.

Brighton drew 0-0 at Peterborough to move into fourth place on goal difference with 66 points above sliding Crystal Palace, who slumped to a 3-0 defeat at Ipswich Town.

Leicester City returned to the playoff zone by replacing opponents Bolton Wanderers after a 3-2 win took them to 64 points, one point above the visitors and late challengers Nottingham Forest, who lost 1-0 at Middlesbrough.

At the other end of the table, Bristol City’s six seasons in the Championship ended when a 1-0 defeat at home to Birmingham City consigned them to relegation to League One.

Cardiff has flirted with success in recent seasons.

As well as missing out on promotion through their playoff heartache, they were beaten in the FA Cup final in 2008 and by Liverpool in last season’s League Cup final on penalties.

The near-misses have come against a backdrop of financial instability, although the financial riches of the Premier League are sure to put the club on a sounder footing.

Cardiff was on the brink of administration and escaped a winding-up petition at the High Court in 2010 after settling a $2.91 million tax bill shortly after the club was taken over by billionaire Malaysian Vincent Tan.

Tan has sought to increase the club’s marketability, especially in Asia, although his decision to change their traditional blue kit to red sparked controversy.

Nicknamed the Bluebirds, having played in blue for over 100 years, Cardiff now has a red badge featuring a dragon, but opposition to the color change has faded with the Welsh club now back in the top flight for the first time in 51 years.