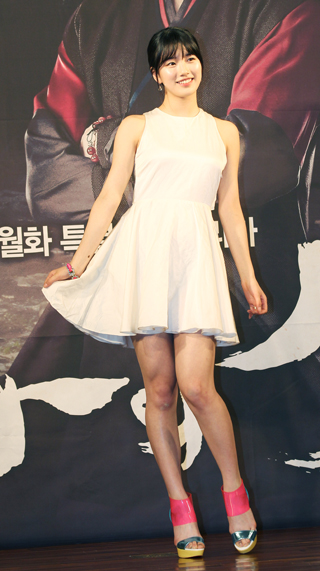 Suzy of girl group Miss A has made more than 10 billion won ($8.9 million) after signing 21 commercial contracts in the past 14 months, according to Ilgan Sports, an affiliate of the Korea JoongAng Daily.

She signed her first contract for a solo commercial in February 2012 and did 20 more after making a debut as part of the four-member girl group in 2010.

Cosmetics, clothing, drinks and mobile phone companies are among those trying to get her to represent them.

Alcoholic beverage makers haven’t yet approached her because she just turned 20 this year.

She’s now one of the highest-paid idol group members, with a salary of about 600 million won per commercial. Her value in the commercial market jumped three-fold in less than two years from about 200 million won after she co-starred in the movie “Architecture 101” in March 2012.

She also won the Best Rookie Actress award at the 48th Baeksang Arts Awards last year for her role in the movie.