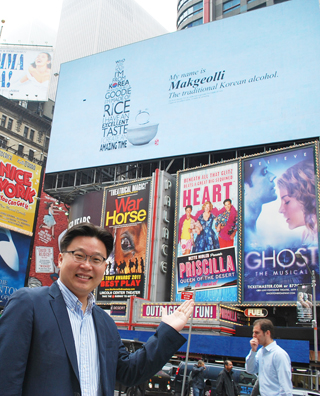 Another Hallyu star may appear on a major newspaper in the United States.
In a bid to promote Korea’s own fermented alcoholic beverage, scholar Seo Kyung-duk of Sungshin Women’s University will again publish an advertisement in The Wall Street Journal.
He announced his plans to put makeolli advertisement on the prestigious business publication in May, according to Ilgan Sports, an affiliate of the Korea JoongAng Daily yesterday. This is following his much-publicized full-page ad featuring actress Lee Young-ae on The New York Times in February of bibimbap, a bowl of rice mixed with vegetable and beef.
Seo plans to fund the cost of upcoming ad by inviting netizens to donate online.
“We think allowing netizens to take part will bring more meaning to this makeolli promotion,” said Seo.
“For the netizens who donated in the fund-raising event, we plan on giving a specialized glass for makeolli or a book mark that features the designs of the advertisement so that we can continue to spark more interest in our traditional alcoholic beverages.”