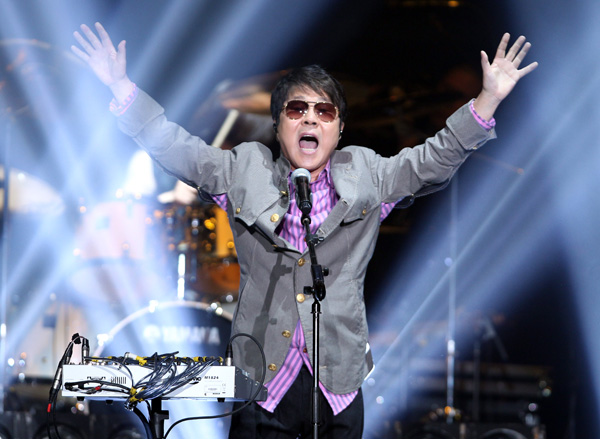 Cho Yong-pil, 63, returns to the stage after 10 years with his 19th album “Hello” at Olympic Hall in southern Seoul on Tuesday night. [JoongAng Ilbo]

Girls began screaming “Oppa!” at the top of their lungs as an idol singer appeared on stage at Olympic Hall in southern Seoul on a rainy Tuesday night. It’s not unusual to witness young girls screaming oppa at a live showcase as a term of endearment for a male star, but in this case, the “girls” were middle-aged.

The legendary artist onstage was Cho Yong-pil, 63, who recently made a comeback with his 19th regular album. His 18th was in 2003.

“I came up to see my dear oppa’s concert from Busan. Even this dreadful rain couldn’t stop me,” said Kang Eun-mi, 56, who was holding Cho’s 10-track album “Hello,” which was released that day.

Cho’s long-awaited showcase, streamed live on Naver, kicked off with the music video for “Hello” in front of about 2,000 fans. Created by visual artist Lumpens, it is a love story about a girl and boy that was filmed in Korea and Canada. Hip-hop trio Phantop performed the single “Like Cho Yong-pil” and other guest artists included rockers Guckkasten, Park Jung-hyun, Jaurim, Verbal Jint, Ideotape, Magna Fall and many more. They sang their own interpretations of Cho’s past hits like “Mona Lisa,” “Short Hair” and “Dream.”

Cho’s first song “Bounce” proved that, even after so many years, the star still has what it takes. The upbeat rhythm and Cho’s youthful voice accompanied by the fanatic screams of “oppa” from the fans seemed like a scene from a boy band concert. Only the deep creases on the star’s forehead that appeared on the screen whenever the camera zoomed in on his face served as a reminder of Cho’s age.

“I usually practice a lot. Even when I am not recording, I practice three to four hours a day. That’s not to sing better but to keep my throat healthy,” Cho said during a press conference prior to the show.

Even though he showed up an hour into the showcase and only sang three songs, it seemed that he surely quenched his fans’ thirst.

“It’s O.K. It’s O.K. Even if he sang one song, I would have been happy,” said Yoon Ok-bin, 50, who said she left Incheon at noon for the show “just in case there was traffic jam or an accident due to the rain.”

Prior to the showcase on Tuesday night, Cho bounced back by prereleasing the single “Bounce” on April 16. The song immediately rose to No. 1 on nine local music charts, competing head-to-head with Psy’s global hit “Gentleman.”

The versatile artist showed a completely different side of himself with his new release as it is brighter and more upbeat compared to his previous 18 albums.

The song includes the English chorus, “Baby you’re my trampoline, you make me bounce, bounce.”

“I never imagined that the song would receive so much love,” Cho said during a press conference. “I actually didn’t designate a title track. I just released a song, and it received tremendous attention thanks to your support. Thank you so much. Bounce. Bounce. My heart is bouncing.”

Cho’s career dates back 45 years. He debuted as a musician in 1968, performing for the U.S. Army with his country band Atkins. Two years later, he joined the rock ’n’ roll band Kim Trio, which inspired him to pursue rock music.

He released his first commercial single “Come Back to Busan Port” in 1975, which launched him to national fame.

Five years later, he released his first album, titled “The Woman Outside the Window.” In the same year, he became the first Korean pop singer to perform at Carnegie Hall in New York.

To promote his most recent work, Cho will begin touring the country on May 31.