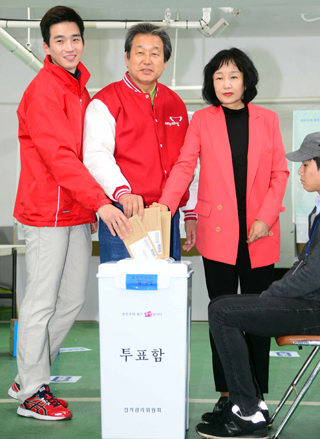 Actor Go Yun of KBS drama “Iris 2” turned out to be the son of Kim Moo-sung, a former floor leader of the ruling Sanuri Party who won a parliamentary seat in Wednesday’s by-election.

One of the officials on the drama production team confirmed the family relation, according to local media reports yesterday.

In the drama, Go, whose real name is Kim Jong-min, played an agent for the terrorist group called Iris.

“He made up his own pseudonym as he did not want people to know that he is the son of [a politician],” the official was quoted as saying.

“He thought his work has nothing to do with the work of his father, and only a few staff members knew his [true identity].”

As the drama was Go’s first as an actor, he will later sign with an agency and expand his presence.

He is not the first actor with a politician in the family. Eun Ji-won, a broadcaster and former member of boy band Sechs Kies, is the nephew of President Park Geun-hye. By Lee Sun-min