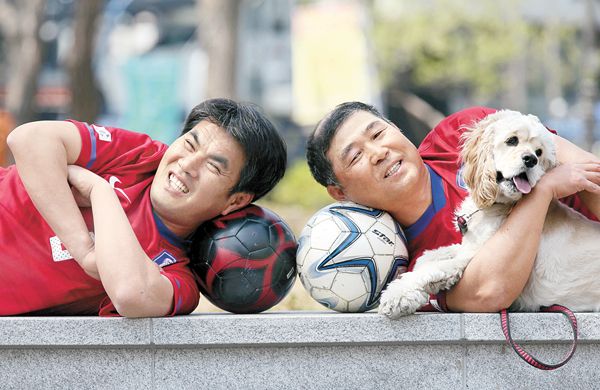 Once-homeless men Lim Heung-sik (right) and Gu Young-hoon have rebuilt their lives after participating in the Homeless World Cup in 2011. By Ahn Seong-sik

Under its slogan “A ball can change the world,” the Homeless World Cup has actually changed the lives of two men who were once homeless.

Lim Heung-sik’s vision became impaired four years ago and he was subsequently fired by his company. He then lived on the street near Yeongdeungpo Station in southwestern Seoul.

The other man, Gu Young-hoon, once ran a vinyl company, but the 1997-98 Asian financial crisis drove his company out of business and its owner on the street.

But they both said they entered a new phase after participating in the sports competition for the homeless.

The Homeless World Cup has worked to encourage the homeless to change their own lives and develop solutions to worldwide homelessness since its inception in 2003 in Austria.

The organization holds an annual football tournament where teams of homeless people from each country compete.

Lim and Gu were selected as players in 2011 and took part in the football competition held in France that year.

“The Korean national team was brought down by Japan 0 to 3, but in the Homeless World Cup, we beat the Japanese team 3 to 0,” said Lim. “I was really proud because I could do something for my country.”

They were also able to see how foreign homeless people look like in the international event.

“I found that people from other countries look happy and comfortable with their lives,” said Gu.

“I heard people from other countries don’t bear such negative prejudices as Koreans might have,” he said.

He also expressed disappointment when he found that big Korean firms offer sponsorships for participants from other developed countries like Sweden.

“We only get sponsorships from one mid-sized company,” he said.

Despite the despair, they made up their mind to move forward after the competition.

Their monthly income, about 900,000 won, may sound modest to many, but for them it’s a precious reward for working.

The two said most people who were part of the team at the Homeless World Cup found their way out of poverty and homelessness.

Lee Seung-gyo, captain of the football team, now works for a glass manufacturing company, while Lim Cheol, who participated in the 2012 Homeless World Cup, found a job at a nonprofit organization.

“I hope many homeless people will participate in the event and rebuild their lives through the world cup as we could,” Gu said.