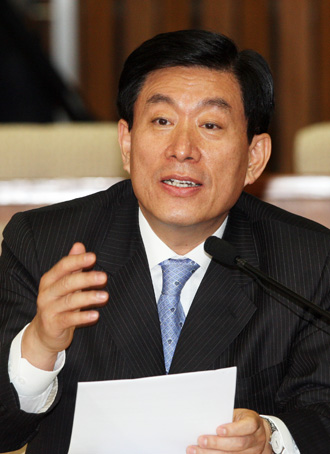 The prosecution’s investigation into alleged politicking by the main intelligence agency ahead of the December presidential election stepped up a notch yesterday as Won Sei-hoon, former head of the National Intelligence Service, was summoned for questioning.

Won, who led the NIS from February 2009 to this year under the Lee Myung-bak administration, appeared before the prosecution yesterday with his lawyer and was grilled about his potential role in the spy agency’s alleged intervention in domestic politics.

A group of officials from the National Intelligence Service has been accused of violating the agency’s political neutrality by posting a series of Internet messages critical of opposition candidate Moon Jae-in of the Democratic United Party before the presidential election.

A special investigation team of the Seoul Central District Prosecutors’ Office launched the probe on April 18 to find out if there were systemic efforts inside the National Intelligence Service to influence domestic politics. On Saturday, Lee Jong-myeong, former third deputy director of the NIS, was questioned about his alleged role in ordering political intervention. A former head of the NIS psychological operations bureau was also questioned on Thursday.

The decision to summon the former NIS chief was made only 10 days after the prosecution’s special probe began, indicating their confidence about the case. Prosecutors had already barred Won from leaving the country on March 23.

“This is a high-profile case, and we think the timing was appropriate to summon him now,” a senior prosecution official said. The Democratic United Party urged the prosecution yesterday to question Won under detention to obtain the truth. Spokeswoman Kim Hyun said Won and the NIS leadership had planned and ordered a systemic operation to manipulate public sentiments to influence domestic politics. She demanded that prosecutors investigate whether President Lee knew about the matter since Won made routine intelligence briefings to him every Friday.

The prosecution has about 50 days until the statute of limitations on the election law violation expires on June 19. The probe was triggered on the eve of the presidential election when dozens of DUP officials camped out in the hallway outside the home of a young female worker of the National Intelligence Service on Dec. 11, 2012, accusing her of posting comments critical of the party’s presidential candidate.

While the NIS denied that it tried to manipulate public opinion to influence the election, the DUP asked the police to launch an investigation the next day. The Seoul Suseo Police Precinct looked into the case and announced its preliminary conclusion on Dec. 16 that it found no evidence to substantiate the charges.

The presidential election came only three days later, and the DUP’s Moon lost to the ruling Saenuri Party’s Park Geun-hye.

The police formally concluded their probe on April 18 before sending the file to prosecutors and have since faced criticism for questioning only two rank-and-file officials of the NIS and a civilian associated with them.

The DUP spokesman said the former head of the Seoul Metropolitan Police Agency, Kim Yong-pan, should be questioned on charges of abusing his power to downsize the initial police probe and violating his duty to maintain political neutrality.