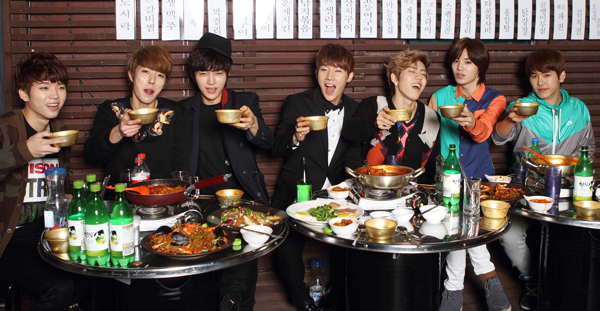 The seven members of Infinite answered questions at a restaurant near Hongik University in western Seoul. From left are Sungkyu, Dongwoo, Woohyun, Hoya, Sungyeol, L and Sungjong. By Yang Kwang-sam

It achieved the K-pop “grand slam” for the first time since Fin.K.L did it 12 years ago with “You Will Never Know.” But most weren’t surprised. Ahead of the triumph, the boy band’s EP “New Challenge” sold more than 100,000 copies in Korea and landed in the No. 1 spot on Japan’s Oricon charts among imported albums.

In order to find out more about the boy band’s success, Ilgan Sports, the sports and entertainment affiliate of the Korea JoongAng Daily, sat down with the group at a restaurant near Hongik University in western Seoul and asked them about a number of topics including love of music and their daily life.

Q. You’ve achieved great success in Japan. How do you feel?

Dongwoo: To be honest, not much yet. But of course, I’m thrilled and touched by Japanese fans coming to see our performances.

Sungkyu: When I went out in town with L, some people noticed L, but not me. I was a little hurt.

You are planning to start a world tour soon. Is there any country you wish to visit in particular?

Sungjong: I’d like to go to Egypt and work for a period of time. Korean pop music is just getting attention there.

Sungkyu: I want to go to Serbia, where one of my avid fans lives. She complimented me for having a face that might appeal to European people.

You are famous for your highly synchronized dance moves. Is it hard to train?

Hoya: Each member gets hurt at least once during dancing, but not seriously. We all know how to deal with it. We usually get hurt by mistakes. I hurt my leg while kicking when we performed and danced to “100 Points out of 100.” It still bothers me.

You are all in your 20s, and you’re probably interested in romance. What happens if you start a relationship but your fans don’t support you?

Woohyun: I would break up out of respect for my fans’ opinions.

Dongwoo: I would persuade my fans by explaining her merits. I can’t easily give up love. I believe my fans would support me going out with a girl I love.

Do you think it is possible to date one of your fans?

Woohyun: I don’t think it is impossible. Actually, our fans are well known for being pretty.

Hoya: Sometimes, when I sing onstage, I get distracted by pretty fans. And then backstage, we ask each other, “Did you see her?”

Tell us about your first loves.

Sungyeol: My first love was a girl five years older than me. When I was a high school student, I spotted her on the street and ran toward her to ask for her number. And we became close.

What is it like living in the same apartment?

Woohyun: Dongwoo and Hoya share the same room. L, Sungkyu and Sungjong share another room. Sungyeol and I have our own rooms. We picked fairly through a game of rock, paper, scissors. We decided on the order for showers and other serious matters using the game as well.

So, who is in charge of cooking?

Sungkyu: Nobody. [Laughs] When we are hungry, we get food from a nearby convenience store. But now, we have a manager who has a cooking certificate. He can cook everything from soup to fried food. He never forgets to prepare breakfast even though it is exhausting enough to wake us up in the morning. So we call him “mom.”

Have you ever fought?

Sungjong: When we were training before our debut, we used to fight a little bit. I think the disagreements brought us closer in the end.

Do you often drink together? How much do you drink at one time?

Sungkyu: It depends on how I’m feeling. Sometimes, when I’m tired, I fall asleep after one glass of beer.

L: I like soju, sake and vodka, but I can’t drink makgeolli [rice wine].

Is it true that L drinks like a fish and then does silly things?

Sungkyu: He doesn’t drink often, but he drinks a lot once he starts. Once he drank a whole bottle of vodka by himself. When he gets a little drunk, he becomes talkative and makes calls to his friends, but he never causes any trouble. Many people think L is quiet and reserved, but actually he is lively and vibrant. So if some people are familiar with L’s public image, they might think he becomes talkative whenever he is drunk.

Where do you see yourselves in 10 years?

Dongwoo: That’s one of the things we talk about the most. We always decide that we should play key roles in music by being involved in writing, composing, and creating album covers and choreography. I think it would be great if L makes music videos, Hoya and I rap, Woohyun composes, and Sungkyu and Sungyeol sing. Sungjong can do the artistic parts like designing costumes.

We also often talk about military service. We once thought about entering the Army at the same time. We have all been rated first-grade soldiers except Sungjong because of his eyesight. We are strong men who can complete military service without difficulty.