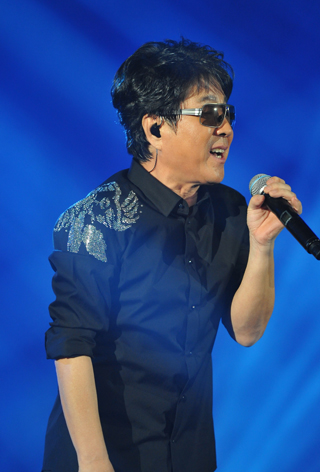 The king of singers showed off his enduring popularity with a successful start to his nationwide tour.

About 30,000 fans visited the Olympic Gymnastics Arena in southeastern Seoul to see a three-day concert by Cho Yong-pil through yesterday, according to the 63-year-old singer’s managers. During each two-and-a-half-hour-long concert, Cho sang nearly 30 songs, including eight songs from his latest album “Hello.”

“When I entered a rehearsal, I got nervous because it was the first stage that I would perform on in one and a half years,” Cho said during yesterday’s concert. “But, once I stand up on the stage, I feel comfortable. Let’s make some noise, clap your hands, stomp your feet and have fun.” Cho, who made his debut 45 years ago, broke a decade-long hiatus with “Hello,” a 10-track album in which he experimented with various musical genres. The album, released in April, won acclaim from critics and fans. “I need to continuously practice,” Cho said during the concert. His tour will continue in Daejeon, Uijeongbu in Gyeonggi, Jinju in South Gyeongsang and Daegu until the end of this month.