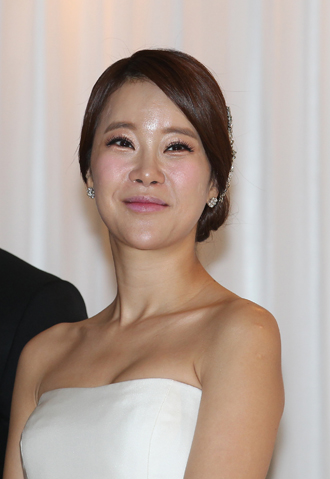 Singer Baek Ji-young has released a new song, “Such Woman,” yesterday, a song specially made for the upcoming music festival in which she will perform.

The song’s arrival surprised many local fans as it had not been previously announced that Baek was planning such a release. It’s the first song she released since she got married last weekend.

As if she wanted to sing how happy she is in her married life, the R&B song focuses on love.

She worked with rapper and producer Su Ho, who has worked with numerous singers, including IU and Kim Bum-su. Also, Yu Sung-eun, a semifinalist of the survival singing program “The Voice of Korea” on cable channel Mnet, volunteered to do the chorus part of the song for Baek.

Baek was one of the judges on the show, and she worked with Yu to share tips during the program.

The singer is scheduled to present the song Friday at the Strawberry Extreme Festival, hosted by Smoothie King, a fruit beverage franchise.

The four-day festival starting Thursday will be held at Uniqlo Ax in northeastern Seoul. Many other local artists, including Jinwoon of 2AM, 4Men, Ailee and rock bands No Brain and Deli Spice will also perform at the festival.