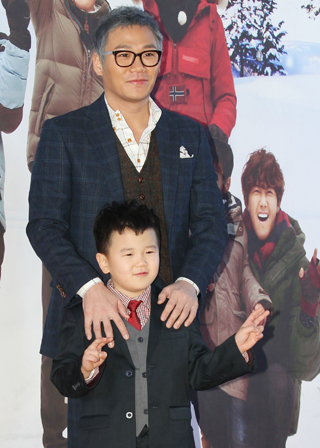 Child star Yun Hu of “Dad, Where Are You Going?” remains in the spotlight after the launch of a web site dedicated to hating the 8-year-old.

Yun was among the most-searched terms on local portal sites from both supporters and detractors.

He is the son of singer Yun Min-su from male duo Vibe and has garnered widespread popularity after appearing on the reality television program with his father. Some fans credit the show with breaking Yun out of his previously close groups of fans.

The Yun Hu “anti-cafe” describes itself as a “gathering of [anyone] who hates Yun Hu and also a cafe where [anyone can] just talk and hang.”

Netizens began expressing their disapproval of the group on Monday when it was among the most-searched terms in the country. They argued it is inappropriate to express such hatred of a child in a public forum though they also voiced their support for individual freedom of speech.

To support the child star and his parents, netizens began searching the phrase, “I love you, Yun Hu,” pushing it to the top of rankings.

Many celebrities joined the movement to support Yun, including Kangin of boy band Super Junior, Lizzy of girl group After School and singer Baek Ah-yeon, a former contestant from the singing-survival program “K-Pop Star” on SBS.

Some stars even posted screenshots of portal sites as they searched the phrase “I love you, Yun Hu” to encourage others to follow suit.

Production staff from “Dad, Where Are You Going?” also posted an encouraging note on the show’s official Facebook page. They said they hope Yun and his family are not upset over the ordeal.

The operator of the controversial web site said it will operate until June 17.