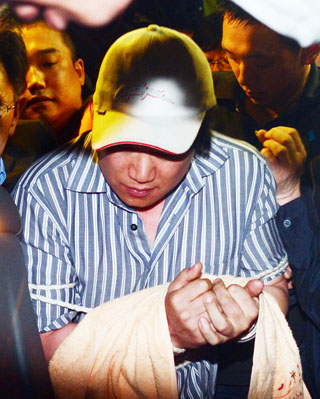 The police arrested Lee Dae-woo in Busan on Friday, ending his 26-day run despite a nationwide manhunt. [NEWSIS]

The nationwide hunt for a robbery suspect who escaped during an investigation finally ended when the police arrested him in Busan on Friday.

Law enforcement authorities said yesterday that his family and a prison mate assisted the fugitive during the 26 days he was on the run.

A joint investigation team of the prosecution and the police said yesterday that Lee Dae-woo confessed that he had met with his family and a friend at least four times and that they gave him money.

The 45-year-old man, who has 12 theft and robbery convictions, escaped from prosecutors’ custody on May 20 while he was being interrogated at the Namwon branch building of the Jeonju District Prosecutors Office on charges of robbing 150 houses around the country since April last year.

He was handcuffed at the time, but it didn’t stop him from climbing over a wall to flee when the investigator left him alone for 10 minutes to use the restroom.

After 26 days, Lee was arrested near Haeundae Station in Busan on Friday evening and the police handed him over to the Jeonju prosecution.

The prosecution said it formally took him into custody once again yesterday after receiving a detention warrant.

Lee was questioned about his time on the run during a nationwide manhunt.

The investigation team said Lee used the money he was given by his contacts to stay in motels on three occasions as well as travel via public transportation.

Lee even signed a contract to rent a studio in the Chinese neighborhood of Garibong-dong, Seoul, the prosecution said, but did not use the place.

“Although we closely monitored 35 of Lee’s confidants, including his family, we have to admit that it was not effective,” Choi Yun-su, a senior prosecutor at the Jeonju District Prosecutors’ Office, said yesterday. “We know about the criticism that our surveillance of family and friends was poor. Because the prosecution is initially responsible for the escape, we will humbly accept the criticism.”

According to investigators, Lee fled from Namwon to Jeongeup and then went to Gwangju, Daejeon, Suwon, Seongnam, Seoul, Ulsan and Busan.

“I wanted to give up,” Lee was quoted as telling the prosecution about why he went to Busan when the search was focused on that city. “I wanted to see the sea.”

The police recently focused their hunt on Busan after they received various tips from residents that Lee might be in the area.

Earlier Friday, a resident made a report after spotting Lee dropping his handcuffs inside a public bus. The police then focused their search along the bus route.

Hours later, Lee was discovered near Haeundae Station and the police arrested him around 7 p.m. He was found with a knife on his body but did not resist, the police said.

On Thursday, the police also received a report that Lee was spotted in an empty house in Busan.

A worker from a demolition company reported that he saw Lee in one of the houses at the construction site. The police confirmed Friday morning that Lee’s fingerprints were found on trash at the site.

Throughout their hunt, the law enforcement authorities were criticized for being ineffective and slow.

After questioning Lee, the prosecution learned yesterday that Lee traveled from Namwon to Jeongeup, Gwangju and Daejeon on the day of his escape and went to Suwon on May 22.

Over the past weeks, the police issued a 10 million won reward for Lee’s arrest and mobilized more than 25,500 officers around the country to strengthen ID checks at major checkpoints around the nation.

National Police Agency Commissioner General Lee Sung-han also promised on June 5 that the officer who captured the fugitive would receive a special promotion, vowing that the central police headquarters will oversee the operation. Despite weeks of searching, Lee still managed to travel across the country until his escape ended on Friday.